'Are we Bangladeshis?': Family cries after protestor brutally killed in Assam's Darrang during eviction drive 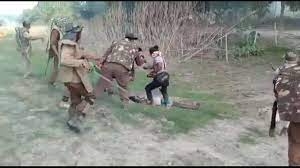 Moinul Haque, the vested man in lungi and stick in his hands who was brutally attacked by Assam state police and stomped and trashed by a photographer associated with Darrang's district administration, was killed yesterday in Dholpur.

"They have killed my son," cried his father. "Are we Bangladeshis? Then send us away!"

Haque was father to three children and provider to his two elderly parent. He was growing vegetables in a patch of land that government claimed was not his and evicted him.

Moinul Haque's wife and mother wept inconsolably, as they huddled under a tin shelter at a makeshift relief camp for some 800 families uprooted from their homes since Monday, according to a report by NDTV.

Moinul Haque was one of two people killed on Thursday when an anti-encroachment drive in Assam's Darrang district blew up into a brutal clash between the police and people protesting eviction. Eleven policemen were also injured.

The Assam government has now ordered a judicial probe into the incident that erupted in Darrang district during an anti-encroachment drive.

Meanwhile, a video of the incident has gone viral on social media where a photographer is seen kicking a person, presumably dead.
However, the photographer soon returned, jumped over the injured man’s body and hit him with something he had picked up lying close by.

Some 800 families were evicted in the drive against encroachments at Dholpur since Monday. The state wants to repossess 4,500 bighas of government land for an agricultural project. Assam firing: BJP alleges Islamist outfit PFI could be behind 'pre-planned' attack on police during...