The Trial of the Chicago 7 review: Immensely relatable to our times, the movie is timely and sharp

Sorkin ensures that he speaks through all his characters but with his wit and charm, you will not mind. He also knows how to tackle drama well and treat his actors right.
Anupama Chandra 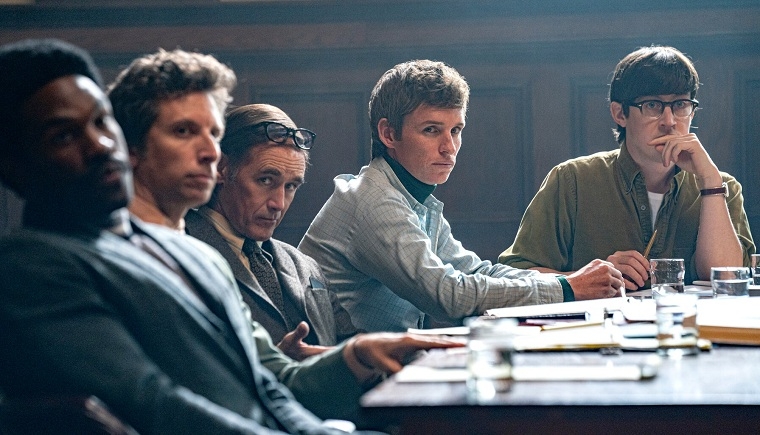 What was supposed to be a peaceful protest turned into a violent clash with the Chicago police. What followed was one of the most notorious 60s trials in American history.

At an important juncture of the film, Sacha Baron Cohen says “Give me a moment, would you, friend? I’ve never been on trial for my thoughts before.” Shockingly relevant to our times, the real-life political drama written and directed by award-winning Aaron Sorkin follows the 1969 contentious trial of seven anti–Vietnam War protesters charged by the Richard Nixon government with conspiracy and incitement to riot among a variety of charges, following the bloody counter-cultural Chicago protests at the 1968 Democratic National Convention. And rises above it all!

In Sorkin’s hands, the already incendiary matter grows in volume, with help from the star-studded bonfire that undermines the US government at every step. Having sampled his penmanship in movies like 'The Social Network' and 'A Few Good Men' and television shows like 'The West Wing' and 'The Newsroom’, cynical Sorkin’s handiwork has never reminded me of Oliver Stone as much as this time round. He sketches the outline with the background information before deep diving into the devious details — weaving between the court scenes and flashbacks to the riots and other relevant past events. It’s true that the drama is almost theatrical and grandstanding at its highest degree but that will not get in the way of your entertainment.

One of the best films of the year, ‘The Trial of The Chicago 7’ has a huge ensemble cast with a bigoted Judge Julius Hoffman (Frank Langella personifying injustice) trying hook and crook of all nature to charge Tom Hayden (Eddie Redmayne), Abbie Hoffman (Sacha Baron Cohen), Bobby Seale (Yahya Abdul-Mateen II), and others with the maximum term possible for riots that they allegedly didn’t cause. Joseph Gordon-Levitt as lead prosecutor Richard Schultz and Michael Keaton as Ramsey Clark shine in their small roles.

Immensely relatable to our times, with autocratic governments working to suppress the voice of reason and peace, the movie is timely and sharp, made more so by Sorkin’s witty writing in the form of one-line quips and long dramatic speeches. All these will ensure the timelessness of the film as well. Of the several great moments of the movie, the one that stands out is when Cohen’s hippie activist Abbie Hoffman explains his actions and steals the show from under Redmayne’s pragmatic Hayden, a crowd favourite till that point. The courtroom drama makes you seethe at the injustice of it all and wish for courage to fight it.

It’s easy for period movies to go over-the-top in terms of look but Sorkin manages to keep the look aptly clean and authentic. Cohen delivers a career-best performance while Abdul-Mateen II acts with such grace in a disgraceful situation that your heart goes out to him. Mark Rylance as their lawyer William Kunstler carries his weight lightly and leaves a mark. Sorkin ensures that he speaks through all his characters but with his wit and charm, you will not mind. He also knows how to tackle drama well and treat his actors right. With the awards season not too far off, suffice to say that “The whole world is watching.”

Title: The Trial of the Chicago 7