#ThanksMughals trends to protest ‘vilification’ after 'Tanhaji' Trailer |
Follow us on

On Wednesday, in what appeared to be a reaction to the Tanhaji trailer starring Ajay Devgn and Saif Ali Khan, several Twitter users started trending #ThanksMughals apparently as a bid to right a historical wrong.

Several users argued that Mughals were always vilified and that the Mughals were intrinsic members of Indian society. It’s an age-old debate on Twitter and the real world, whether Mughals were invaders or became part of India’s syncretic culture.

Many credited the Mughals for several things including the concept of Akhand Bharat (united India), biryani, the Red Fort, Taj Mahal and other contributions to the nation’s culture and heritage.

I love the Mughals.
They united most provinces in India, bringing them under federal system. They established ‘Akhand Bharat’.
They contributed immensely to the nation’s culture & heritage.
India would not be India without Mughals.
Trend #ThanksMughals with pics of their legacy

The Taj Mahal, built by the Mughals, continued to be the highest revenue generating monument with Rs 56.83 crore in the year 2017-2018. Taj, which they want to demolish claiming there’s a temple beneath, is declared UNESCO world heritage site. My click (2018) #ThanksMughals 1/2 pic.twitter.com/7GM5IqzGlT

Started trending in Top 20. This is our humble collective effort against the demonisation of Mughals by the state, the media and Bollywood.
India would not have been India without the contribution & legacy of Muslims. Trend with hashtag #ThanksMughals pic.twitter.com/d7NbjauBHq

Where would the PM address the nation on Independence Day if the Mughals hadn’t built the Red Fort?#ThanksMughals https://t.co/EwWe8UYeby

Disagree with #ThanksMughals. Like any medieval rulers, Mughals pursued power. When we cherrypick their achievements, we justify Sanghis who cherrypick Mughal atrocities to attack today's Muslims. We should stand with Muslims, Sikhs other minorities, not with Mughals or Peshwas

Meanwhile, some disagreed with the idea. One user wrote: “Disagree with #ThanksMughals. Like any medieval rulers, Mughals pursued power. When we cherrypick their achievements, we justify Sanghis who cherrypick Mughal atrocities to attack today's Muslims. We should stand with Muslims, Sikhs other minorities, not with Mughals or Peshwas.” Ajay Devgn dropped the much-awaited trailer of war saga ' Tanhaji: The Unsung Warrior', which will take you down the Mughal era. The breathtaking trailer showcases the era like never before.

The 'Phool Aur Kaante' actor shared the trailer on Instagram handle and captioned the video as, "4th Feb 1670: The surgical strike that shook the Mughal Empire! Witness history like never before. Presenting the official #TanhajiTrailer."

The trailer of the movie depicts the surgical strike that shook the Mughal Empire. It essays the battles fought for the freedom of the throne of Kondhana constituency.

Ajay Devgn who plays the protagonist, Tanaji Malusare, is seen fighting for the state and its freedom against the crooked antagonist Udaybhan played by Saif Ali Khan who works for Mughal Emperor Aurangzeb. Kajol is seen essaying the role of Tanaji's wife Savitribai Malusare, who stands by him like a rock.

The trailer also features Sharad Kelkar as Shivaji Maharaj and Padmavati Rao as Jijamata. The trailer showcases the ferociousness of the Marathas when it comes to fighting for their land.

'Tanhaji - The Unsung Warrior' is a biographical period drama film based on the life of legendary Tanaji Malusare. The movie also features Neha Sharma, Jagapathi Babu and Pankaj Tripathi in the lead roles. The 3D movie is set to release on 10th January 2020. 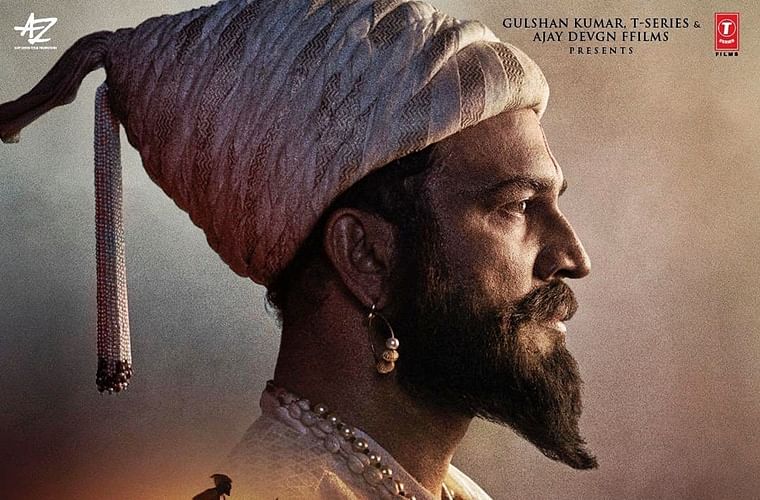