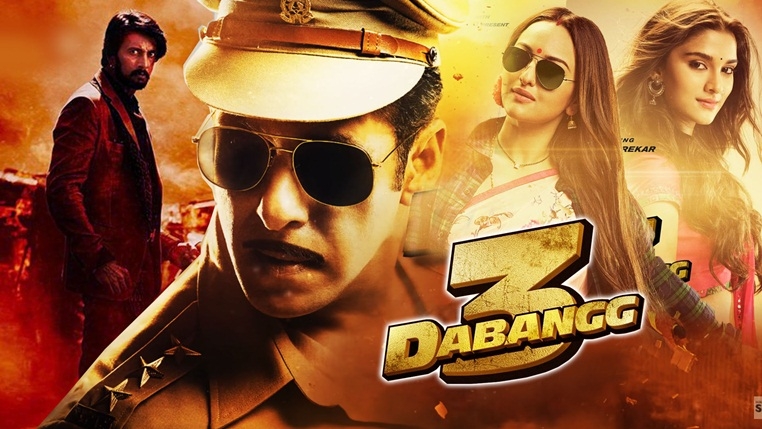 Dabangg 3 Trailer: Salman Khan is back with a bang as Chulbul Pandey | Image created by Mahesh More

Mumbai: With #BoycottDabangg3 trending on Twitter since Friday morning over netizens' claim that the film has upset Hindu sentiments, a Bengaluru-based NGO, Hindu Janajagruti Samiti, has demanded that the films censor certificate should be cancelled.

Controversy rose after a section of social media objected to scenes in the film's title song that shows saffron-clad sadhus dancing with guitars.

In a letter submitted to Central Board of Film Certification's (CBFC) Bengaluru office, the NGO wrote: "Request to cancel the Censor certificate to the forthcoming movie Dabangg 3, which insults Hindu Dharma". Dabangg 3 has been produced by Salman Khan Films. A trailer of this movie features a song ‘Mai Hu Dabangg Dabangg, Hud Hud Dabangg! Which depicts an obscene and seductive dance by Hindu sadhus. Also, in the song, the deities Krishna, Ram and Bhagwan Shankar are shown blessing the hero. The song denigrates Hindu sadhus, deities and dharma, it is claimed. "If the movie happens to be on the lines of what we saw in the trailer, it is an extremely shocking depiction of the Hindu deities and sadhus. It also goes at great lengths to poke fun at the basic foundations of Sanatan Dharma (Hinduism). In view of the above you are requested to cancel the censor certificate for this denigrating film," the letter further states. Netizens, who are upset with the alleged depiction of Hindu sadhus in the film, are also demanding an apology from the film's lead actor and one of the producers Salman Khan.

In this context, a user tweeted, "#BoycottDabangg3. Salman Khan has to apologise for the degrading our Hindu saints. Will he dare to say or show something on Maulvis??"

However, Salman Khan and the makers of the film are yet to react. Directed by Prabhu Deva, "Dabangg 3" also stars Sonakshi Sinha, Arbaaz Khan and Saiee Manjrekar in key roles. The film is slated to hit theatres on December 20.