In this pandemic-stricken world, all we need is love, hope and laughter. And that’s what Hubie brings to the table
Anupama Chandra 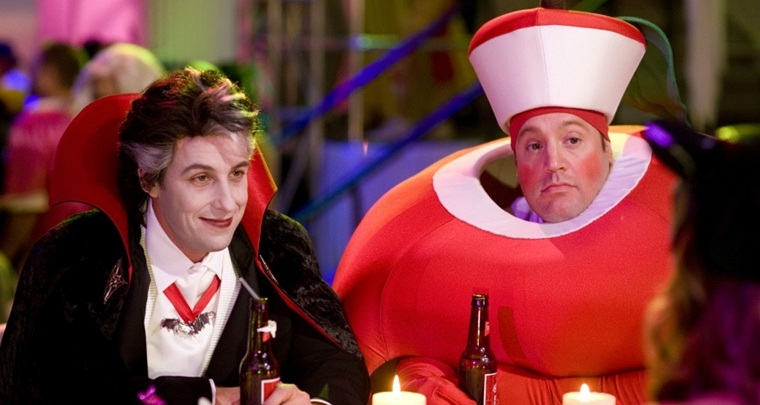 It's Halloween in Salem and the town's eccentric community volunteer, also the object of his fellow people’s derision, Hubie Dubois finds himself in the midst of a real murder mystery.

Adam Sandler brings his own brand of funny in his movies that covers the entire gamut of offensive from the mild, such as weird accent and gags that make you retch to the crude like scatological and sexual humour. If you can put up with or even enjoy that bit, I have mostly uncovered a heart of gold underneath that upholds the importance of solid, old-fashioned values. His last year's unusual presentation, ‘Uncut Gems’, was a flash in the pan but as ‘Hubie Halloween’ he is back to his core competency.

In the Halloween capital of Salem, with its long tradition with witches and witch-hunts, Hubie is a cheerful, sincere, kind childlike man who is devoted to his mother (June Squibb), Violet Valentine (Julie Bowen), Halloween (with its intrinsic connection with Salem) and community rules above all and goes out of the way to keep all of them pristine, all the while carrying a postbox-red thermos. Hubie recognises that his high-school flame Violet is out of his league and respectfully maintains social distance, while being completely unaware of her silent love for him.

He is also the standard butt of insults and pranks by the entire community for being a simpleton, save certain kind-hearts, especially because he’s easily spooked by Halloween decorations while self-anointing himself Salem’s Halloween community ‘monitor’, with a sash to prove it and biking around its streets to ensure that people celebrate the holiday in the right spirit. And that’s the perfect excuse for Sandler to goof around in his well-established tradition. As the Halloween evening rolls on, a suspiciously mysterious neighbour (Steve Buscemi) moves in next door while a patient (Rob Schneider) escapes from a neighbouring asylum and, most alarmingly, people who have been meanest to Hubie begin to disappear.

As a kid, I had learnt to associate Sandler with Thanksgiving but he is extending his mark to Halloween as well. This latest Billy Madison production reads like a roll-call of his regular friends (such as Rob Schneider, Tim Meadows, and Kevin James), and an appearance by a former NBA star Shaquille O'Neal adds its won charm. Director Steven Brill has also worked with Sandler before and does a competent job. The production design is way better than I would have expected. The ensemble cast pulls its weight nicely — with heavyweights like Ray Liotta, Steve Buscemi, Michael Chiklis, and Maya Rudolph couldn’t expect any less, could we?

As a character, Hubie is starkly reminiscent of Sandler’s The Water Boy, Canteen Boy and an antithesis of Zohan. And at all times, his heart of gold shines right through. The value of Sandler’s movies is adequately recognised by our mainstream film industry, which has taken ample of inspiration from several of his comic blockbusters — be it Happy Gilmore, Anger Management, The Wedding Singer, or I Now Pronounce You Chuck and Larry.

I have mostly found Sandler’s jokes sub-standard but for Hubie, he seems to have worked out a new strain that is sweet and tender. In this pandemic-stricken world, all we need is love, hope and laughter. And that’s what Hubie brings to the table — honest, stupid fun that’s done just right.