Sonam Kapoor is all gaga over hubby Anand Ahuja as the couple celebrate their second wedding anniversary four years of their first meeting. The 'Saawariya' actor put out on Instagram her first picture with 'compassionate, generous, moody' Anand. Sonam and Anand began dating in 2014 and tied the knot on May 8, 2018.

Who is Anand Ahuja?

Anand is a Delhite and entrepreneur, owner of the label, Bhane, a well-known clothing brand. He pursued his education from the American Embassy School and higher business studies from the Wharton School of the University of Pennsylvania. He also did an internship in Amazon.com in Seattle, USA.

His family owns Shahi Exports, which is the biggest export house of India, typically run by his grandfather Harish Ahuja. The turnover of the company is at $450 million. With all the glitz and glamour around, Anand’s own property valuation is around Rs 3,000 crore. He is definitely the man of Sonam’s dreams who shares similar personality traits as the actress herself. He loves a good pair of sneakers. The duo share equal love for designs as we know Sonam is a fashionista herself and also the co-owner of Rheson – clothing brand alongside her sister. Ahuja is also a close friend of fashion entrepreneur Pernia Qureshi, who has been Sonam’s stylist.

In an interview to a youth portal, he once said, “It wasn’t always smooth sailing though. Coming from a family that owned and operated a successful brand of apparel, I set very high expectations for the business. There was constant pressure to achieve these, and there were days when I would come down very hard on myself for not matching certain preconceived standards of success that my legacy had left me with. I was hard on the team too, when Bhane did not achieve what I envisioned for it.”

Anand is a sneaker aficionado. He turned his love for shoes into a business model in 2016. Ahuja launched started VegNonVeg, a multi-brand sneaker store with his friend Abhineet Singh. He was also featured in GQ India’s list of biggest sneakerheads of Instagram, along with actors Shah Rukh Khan and Varun Dhawan.

In 2018, Sonam got candid on her married life to Anand. She told Vogue India (the magazine shared exclusive pictures of the wedding), “I was apparently wearing the worst sneakers he had ever seen. I keep telling him that he fell in love with me despite my bad sneaker game… That day, walking and talking in London, I knew he was the love of my life. He apparently knew the first time we spoke on the phone… It was just so easy.”

Anand gave a recap on their early days of friendship and how small talks turned into midnight conversations for hours. “The first time we met, we talked about our respective work. I was just struck by the fact that I could speak to her so openly about everything. We were chatting on Snapchat one night and she said, ‘Stop texting, just call me.’ And we spoke for two hours that night… Our friendship started over superficial things like vegan chocolates and sneakers but soon we were having deeper conversations”, he said.

The couple even went on to take each other’s name as Sonam K Ahuja and Anand S Ahuja. Clearly, everyday is phenomenal for the much in love couple, celebrating love and togetherness amid quarantine. 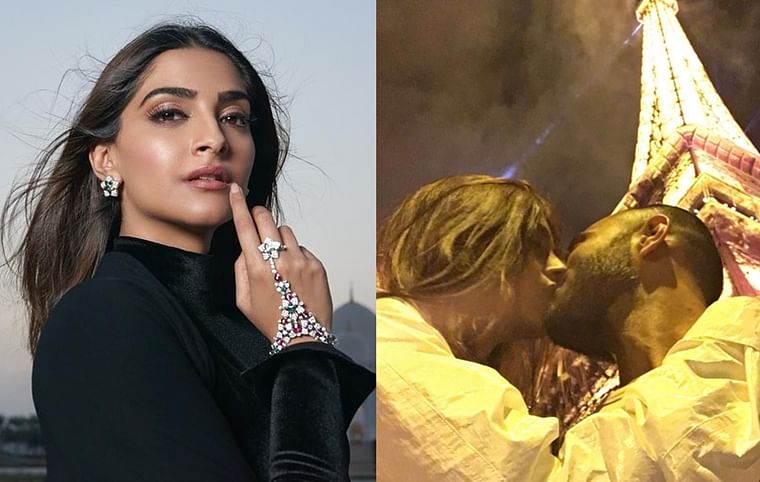