The congress workers showed their protest against the incident of Lakhimpur Kheri and also raised slogans against the central government.
FP News Service 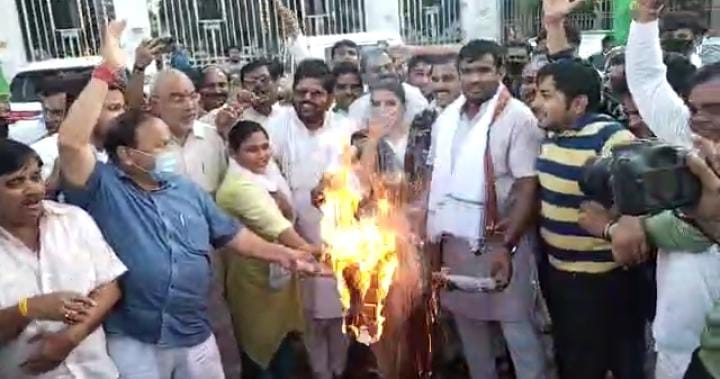 Gwalior (Madhya Pradesh): The Congressmen burnt the effigy of Uttar Pradesh chief minister Yogi Adityanath in front of Gandhi Udyan in Phulbagh, Gwalior on Monday in the death of farmers in Lakhimpur Kheri.

The congress workers showed their protest against the incident of Lakhimpur Kheri and also raised slogans against the central government.

Nonetheless, the heavy police force there poured water on the burning effigy and jiggled with party workers.

Notably, the Congress MLA Satish Sikarwar was in the Bhartiya Janta Party (BJP) in the past. When the free press questioned Youth Congress Gwalior President Hevran Singh Kanshana in this regard, he expressed his ignorance in this whole matter and talked about always standing with the farmers.

District Congress President Devendra Sharma said that the Congress would always fight against the dictatorship rule in the country and stand with farmers. He also criticised the unethical behaviour of the administration shown towards Priyanka Gandhi when she reached Lakhimpur to meet the kin of victims.