CM flags off Bhopal-Varanasi train with culture minister Usha Thakur on board ; Sundarkand, Bhajans to be recited during the journey.

CM Shivraj Singh Chouhan bids farewell to pilgrims as they leave for the Kashi Vishwanath temple in Varanasi through a special train as part of the 'Mukhyamantri Tirth Darshan Yojana', at Rani Kamlapati railway station in Bhopal, Tuesday. | FP
Advertisement

Bhopal(Madhya Pradesh): Around 900 pilgrims left for Varanasi for ‘Teerth Darshan’ from Kamlapati Railway station on Tuesday singing bhajans on beat of dholak and manjira.

Relaunching the 'Mukhyamantri Teerth Darshan Yojana, which was discontinued during pandemic time, the Chief Minister Shivraj Singh Chouhan flagged off the train from Rani Kamlapati railway station for Varanasi. Minister for culture and religious endowment Usha Thakur is also accompanying the pilgrims to Kashi-Vishwanath. Pilgrims at the railway station to board train to Varanasi | FP Flower petals were showered on the pilgrims as they entered the Railway station. Tribal artists added to the charm by their folk music and dance performance.

The chief minister felicitated the pilgrims with shawls, shriphals and also handed over japa mala and wished them “Mangalmayi yatra” (safe journey). Chouhan said that Sundarkand, Bhajans will be recited in the train during the journey. Addressing the pilgrims, Chouhan assured that the Teerth Darshan scheme will continue for the people without any disruption. “Today my heart is full of joy and happiness. Our pilgrims are going to have a great experience of life. The government had launched the Tirth Darshan scheme in 2012 to take people for pilgrimage free of cost. The government has arranged for breakfast and tea for pilgrims in the train and their stay at the holy city. The scheme will not be discontinued and the train will take pilgrims for darshan.” After returning from the pilgrimage, the people should work for environment conservation and also raise awareness in public to give up liquor, said Chouhan. The pilgrims should also give due respect and regards to their daughters, stressed Chouhan. CM offering prayer ahead of flagging off special train | FP 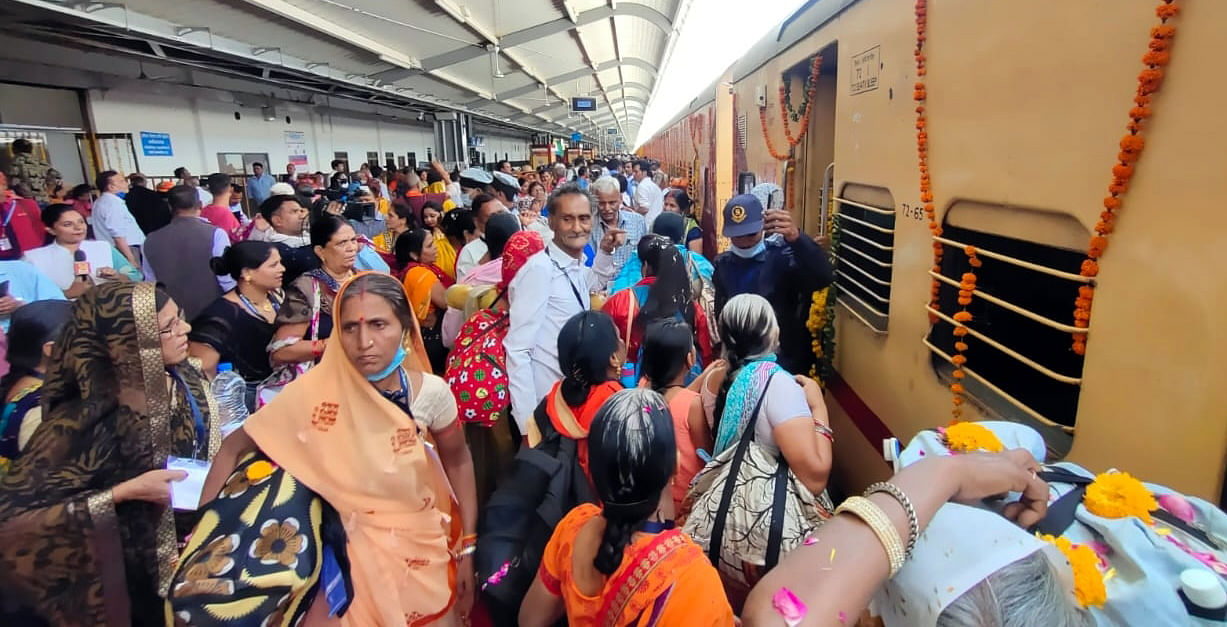