There is about 400 km of single railway track connecting Gwalior-Guna-Maksi.
FP News Service 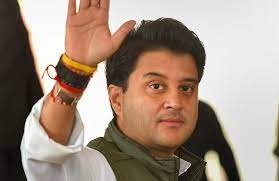 There is about 400 km of single railway track connecting Gwalior-Guna-Maksi. Because of which a few trains pass from the area and people of these areas face problems in travelling.

Scindia wrote in the letter that if the double railway track starts, then some trains of Gwalior-Mumbai rail route can be run on this track. It will also reduce the traffic load on the main track and the people here will also get new trains.

Scindia is, however, trying for a long time for making the double track and for starting electric trains on this track. Electrification work has been completed and the work of doubling the track is yet to start.

Notably, since Jyotiraditya Scindia became the Union Civil Aviation Minister, he has been expanding the air services in the Gwalior-Chambal division. The city has now been connected with direct air service to many big cities and states.