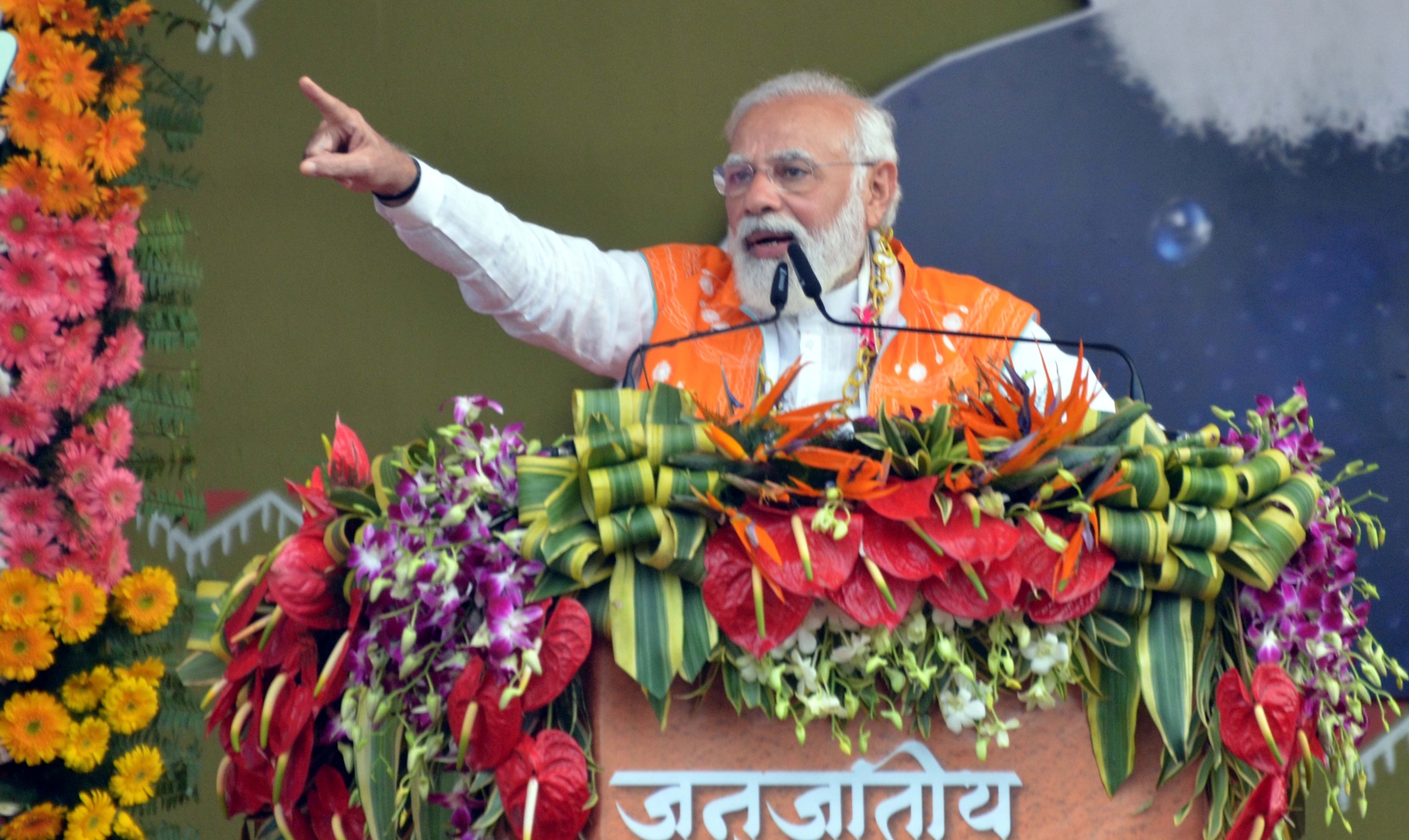 Bhopal (Madhya Pradesh): Underlining tribal community’s strength and culture right from ancient times and with sketches of legendary freedom fighters from the community members in the background on the dais Prime Minister Narendra Modi launched a scathing attack from Bhopal on Opposition Congress, though without naming it, for, he said, committing a crime in not giving due importance and priority to the community, when it was in power.

“The crime committed by previous governments in not giving due importance and priority to the tribal community needs to be spoken about continuously. It needs to be discussed on every forum”, said the Prime Minister while addressing a huge congregation of tribal community members drawn from various parts of the state, on legendary freedom fighter Birsa Munda’s birth anniversary on Monday observed as Janjatiya Gaurav Diwas.

The PM also announced that Janjatiya Gaurva Diwas would be celebrated every year from now on like Gandhi, Patel and Ambedkar Jayanti.

He said the community had extended its help to legendary warrior Maharana Pratap and also played a key role in the freedom struggle.

“We are all indebted to them which can’t be repaid but we can perform our duties by preserving our legacy and giving it a due place”, he said.

The PM said despite the community accounting for about 10% of the total population of the country their culture and strength were ignored for decades after the Independence.

“Grievances and pain of tribal, education of their children, their health hardly mattered for them (The then rulers)”, said the PM.

The PM said when he began his public life in Gujarat decades back he saw that certain political parties in the country deprived the tribal community of all the facilities and resources associated with development. Then, votes were sought repeatedly in the name of working on those deprivations. Power was gained (Satta paayi gayi) but what was supposed to be done for the community was not done.

When he got the opportunity to serve the country in 2014, he said, he kept in the interest of the tribal community as the topmost priority of his government.

“Today, in true sense the community is contributing to development of the country. The schemes for homes, toilets, free power and LPG, schools, roads, free treatment were implemented in tribal areas with as much speed with which it is being implemented in other parts of the country”, he said.