The Border Security Force (BSF) said the seminar will chalk out a "comprehensive operational plan in the existing dynamic scenario" as well as other key points seeking improvements for robust national security.
Staff Reporter 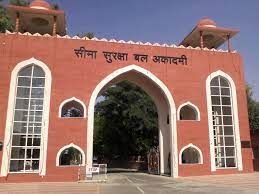 New Delhi/ Gwalior (Madhya Pradesh): A first of its kind national level seminar aimed at "analysing various emerging challenges on India's borders pertaining to national security" is slated to be conducted between November 8 to November 10 in BSF academy in Gwalior’s Tekanpur.

The Border Security Force (BSF) said the seminar will chalk out a "comprehensive operational plan in the existing dynamic scenario" as well as other key points seeking improvements for robust national security.

The event, which will begin on November 8 (Monday) and conclude on November 10 (Wednesday), is also aimed at bringing about synergy and enhancing the operational efficiency of the BSF.

As BSF is performing an anti-infiltration role in Kashmir Valley, counter-insurgency in North East region, anti-Naxal operations in Odisha and Chhattisgarh states, and security of Integrated Check Posts along with Pakistan and Bangladesh International Border, the seminar seems to play a significant role in enhancing its capacity.

BSF took Twitter to announce the seminar, and mentioned, "A first of its kind national level seminar aimed at analysing various emerging challenges on our borders pertaining to national security and chalk out a comprehensive operational plan in the existing dynamic scenario is being conducted at BSF academy Tekanpur".

The BSF, which came into existence on December 1, 1965, with KF Rustam as the first chief and founding father, has been currently guarding the International Border with Pakistan and Bangladesh.

Initially, in 1965, BSF was raised with 25 Battalion, and with the passage of time, it was expanded as per the requirement of the nation to fight against militancy in Punjab, Jammu and Kashmir, and the Northeast region.

At present BSF is holding 192 (including three NDRF) Battalions and seven BSF Arty Regiments guarding the International Border with Pakistan and Bangladesh.

During peace-time, BSF promotes a sense of security among the people living in the border areas, prevents trans-border crimes, unauthorized entry into or exit from the territory of India as well as prevents smuggling and any other illegal activity.

In wartime, the BSF holds ground in less threatened sectors so long as the main attack does not develop in a particular sector, and it is felt that the local situation is within the capability of the BSF to deal with.

The force then plays a key role in the protection of vital installations particularly air-fields against enemy commandos and paratroopers or raids.

Besides, it supports at the time in limited aggressive action against paramilitary or irregular forces of the enemy within the overall plan of the Armed forces and performs special tasks connected with intelligence including raids.

The BSF also acts as guides in an area of responsibility where routes are known, maintain law and order in enemy territory administered under the control of the Army, guard prisoners of war cages in wartime.

The force then also provides assistance in the control of refugees and anti-infiltration duties in the specified area.