The incident was reported in Alampur police station area in Bhind and the police called it a result of an old enmity.

Billu Chauhan a native of Rurai village was shot dead early morning, the police said. Chauhan was an accused in two murders years ago and was released on bail last year. He was killed out of enmity among local families, the SDOP AVnish Bansal said.

He added that the murder had nothing to do with the polling but the police are probing into the case closely.

Some other areas of Bhind too faced tense situation during polling process. A dozen polling booths under Mihona area witnessed stone pelting also injuring police jawans. Heavy police force was deployed in the area after the incident.

In Morena, some fake voters were arrested by police in Ambah block’s Jalauni gram panchayat. The fake voters hail to Gujarat and Rajasthan and an SUV used by them was also seized by the police.

In Gwalior, around 31% voting was reported till 3pm for Zila Panchayat. While at Dabra, around 33 % exercised their franchise till 11am and women outnumbered men in voting. The polling was slightly slow at Bhitarwar Janpad Panchayat as only 29.8% cast their votes by 11am.

In Murar area also women outnumbers men as the area recorded 30% voting by 11am. 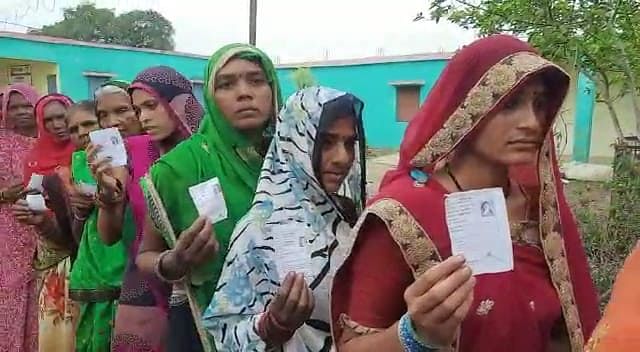 Madhya Pradesh is witnessing the first phase of panchayat polls at 8,702 village panchayats on Saturday, which fall under 115 development blocks across the state, as per the state election commission.

The polling will be held at as many as 26,902 polling stations which include 3989 sensitive polling booths from 7 am to 3 pm. As many as 52,000 police personnel have been deployed at the polling booths to ensure free and fair polling, according to state election commission.