Bhopal/Morena: Union civil aviation minister Jyotiraditya Scindia said in Gwalior-Chambal region on Wednesday that there was a double engine governance in Madhya Pradesh led by Prime Minster Narendra Modi in Delhi and chief minister Shivraj Singh Chouhan in the state.

Scindia was on his maiden visit to his home turf after being elevated as union minister. He was accorded warm reception in Gwalior and Morena.

In his first reaction to media near Rajghat bridge built on Chambal river Scindia said, “The BJP is a disciplined party and its leaders work in tandem for growth and development. Our PM Narendra Modi ji is a visionary leader. Under his guidance the whirlwind tour of the region was planned after streamlining the ministry work.”

Earlier Scindia reached by car from Delhi to Rajghat bridge on Chambal River (Morena district) as scheduled at around 11.30 am.

Union minister Tomar introduced Scindia to party functionaries and workers on his arrival and then they proceeded to Morena city.

“Enthusiasm among party workers was palpable as people vied with one another to draw attention of their leaders. More than 2 hours long road show in Morena city brought the life to standstill as motorcade passed through the localities”, states the release.

Scindia together with Tomar and others were seated in especially designed open carriage brought in from Indore. Women wing of BJP functionaries performed arti, offered flowers and danced to the tune of patriotic songs. Fire crackers were busted on every nook and corner en route the Maharaj Baba where rally was schedule to culminate. The city was adorned with banners, posters, cutouts etc. People were lined up along the route and he showered floral petals on the leaders. 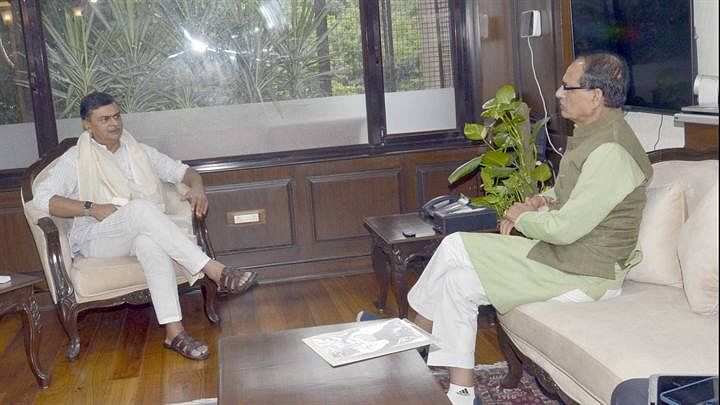