Youth Congress had earlier announced the gherao of State Assembly on August 11 considering the monsoon session will conclude on August 12. Nevertheless, Assembly was adjourned sine die on Tuesday after which the Youth Congress decided to gherao CM House.
Staff Reporter 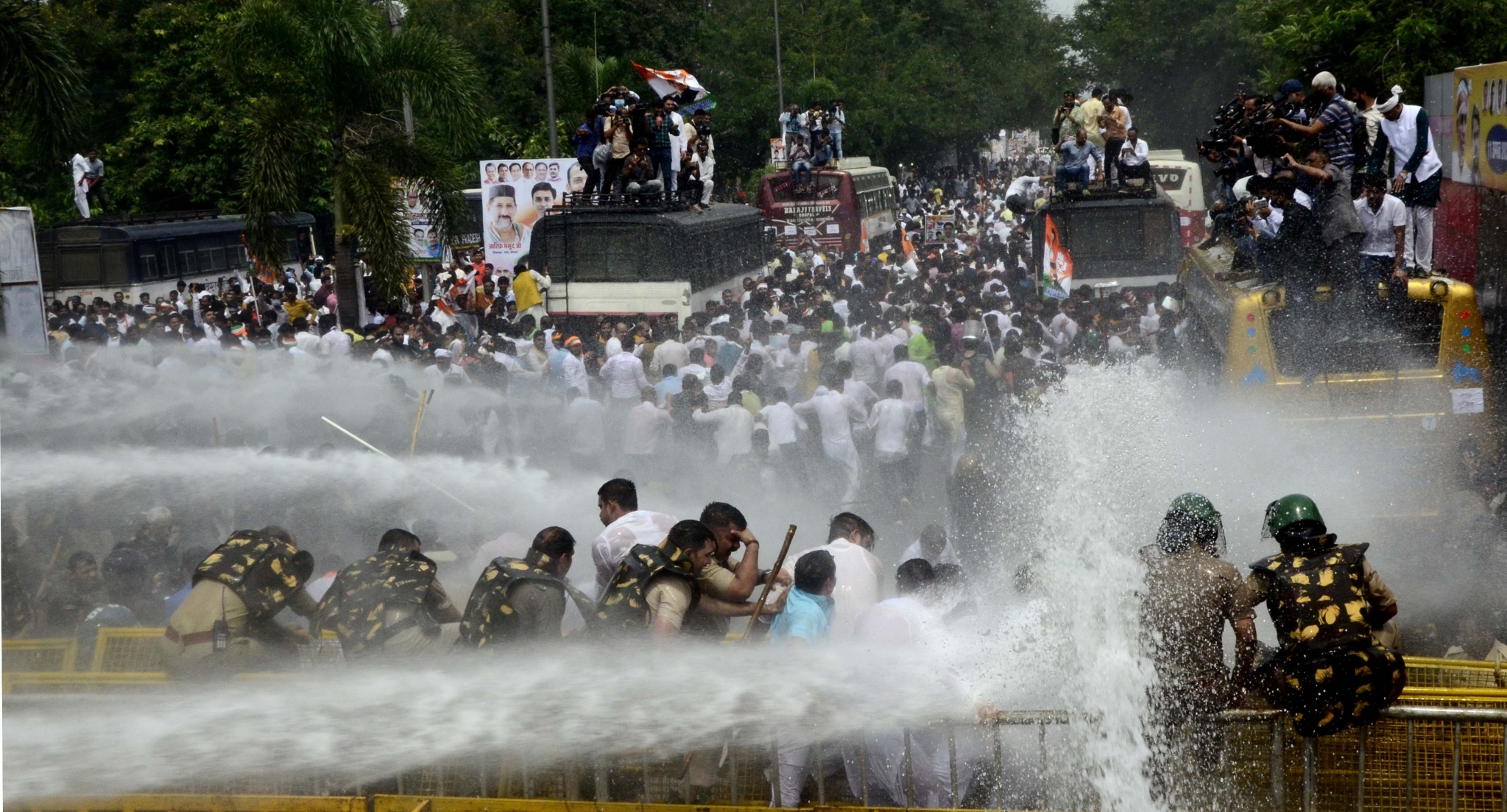 DOUSING THE FLAMES OF PROTEST: Police use water cannons on the Youth Congress workers as they march towards CM House in Bhopal to gherao on Wednesday. | FP

The Youth Congress members led by National president of Youth of Congress BV Srinivas were marching towards CM house, when they were stopped by police near Red Cross Hospital. The youth Congress workers tried to climb up the barricades and also had altercations with police officials.

The police first used water cannons to disperse the crowd and then resorted to lathi charge to prevent the protesters from forcing their way through barricades. In the melee clothes of MLA Jaivardhan Singh were torn. Several YC workers sustained mild injuries in cane charge by the police.

“BJP government in Madhya Pradesh and centre are afraid to face real issues of rising prices and unemployment and therefore adjourning the Assembly and Parliament before the scheduled time,” said Sriniwas. While talking to journalists, MLA Jaivardhan Singh said, ‘Every drop of our blood is dedicated to Madhya Pradesh.’ 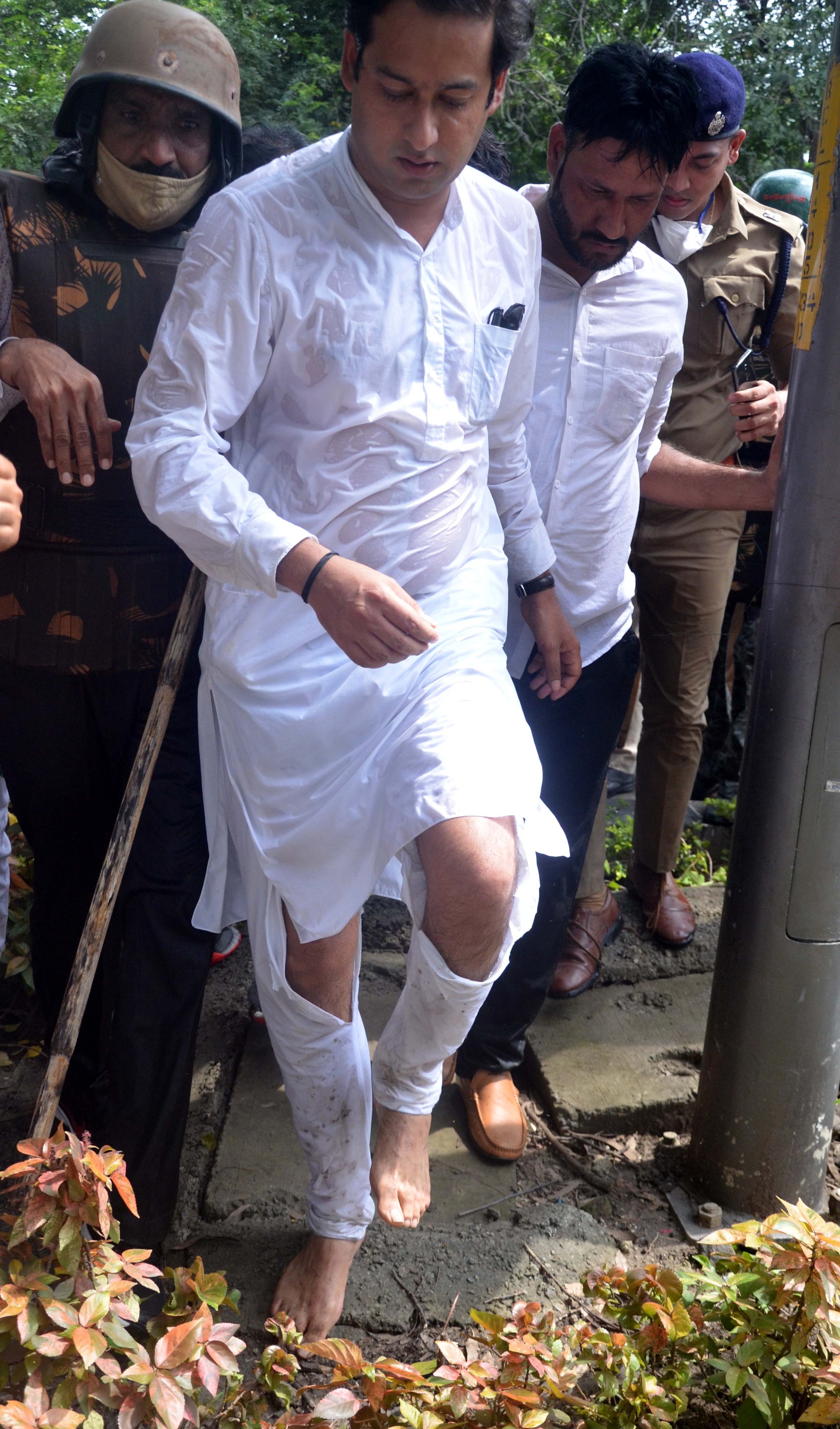 FOR THE PEOPLE: The clothes of Raghogarh legislator Jaivardhan Singh torn in the melee on Wednesday. | FP 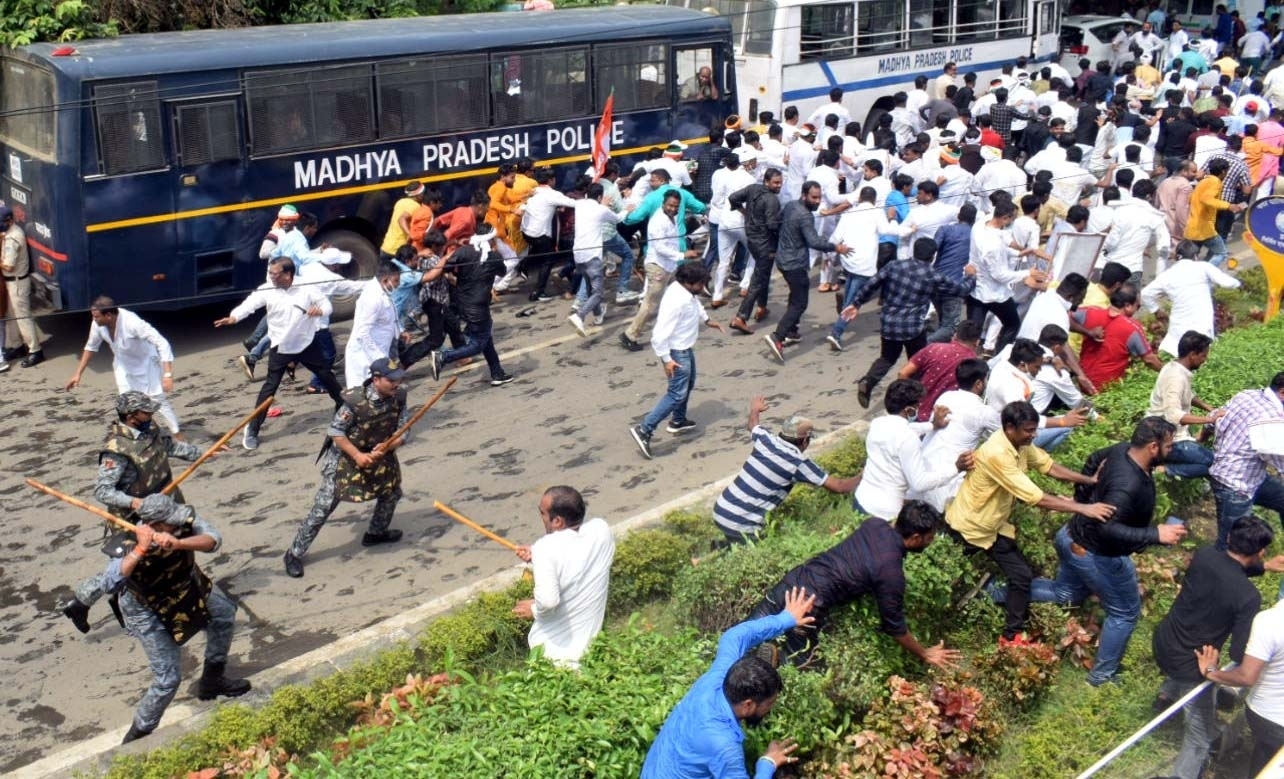 NO CARROTS, ONLY STICKS: Police lathicharge on Youth Congress workers as they take to streets protesting against inflation and unemployment in Bhopal on Wednesday | FP

Youth Congress had earlier announced to gherao of State Assembly on August 11. However, the House was adjourned sine die amid ruckus by Congress for implementing the OBC quota on Tuesday. The monsoon session was supposed to conclude on August 12. Nevertheless, Assembly was adjourned sine die on Tuesday after which the Youth Congress decided to gherao CM House. The PCC office was heavily barricaded and a large posse of police was deputed armed with water cannons and lathis on route to the CM house.

About five buses full of Youth Congress workers were taken out of city to Ratibad. The detained protesters were later released. Protestors also included women members who alleged that they were ill treated in absence of lady police. FIR was registered against Srinivas B V, state unit president Vikrant Bhuria, MLAs Jaivardhan Singh and Kunal Choudhary and others under sections 188 (disobedience to order duly promulgated by public servant) and 147 (rioting) of the Indian Penal Code (IPC). 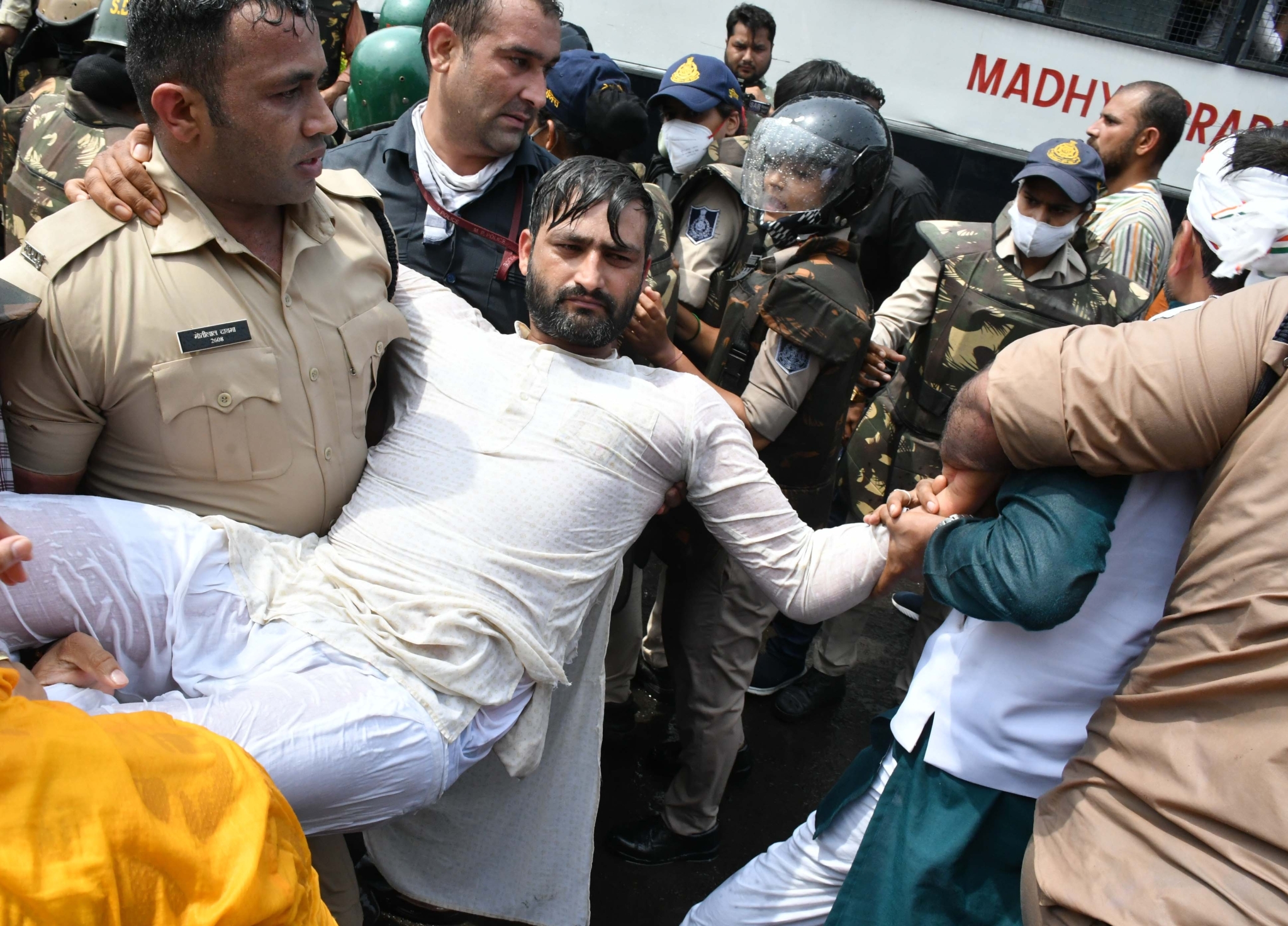 Police carry IYC worker and arrest them as they march towards CM house to gherao on Wednesday. | FP 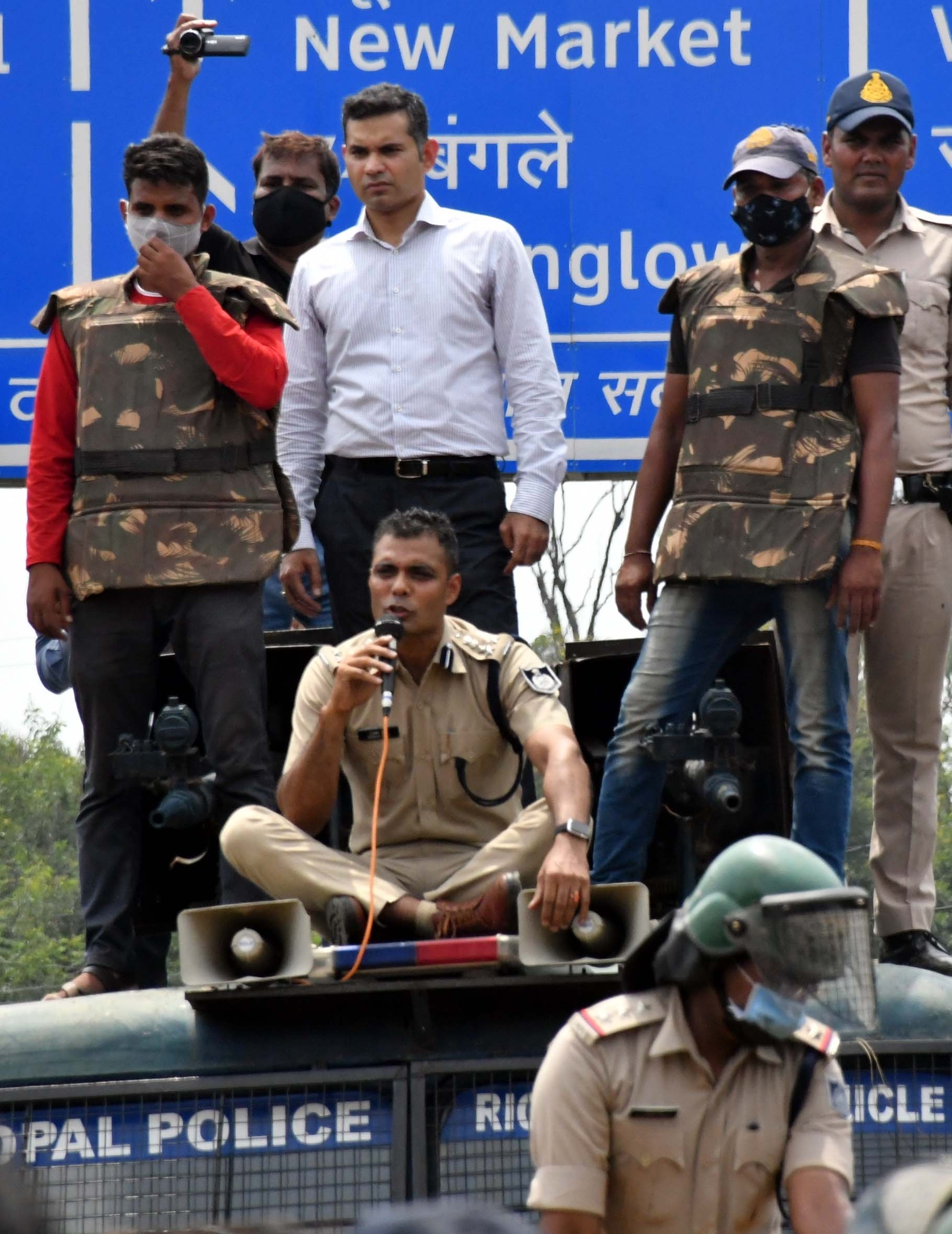 DIG Irshad Wali taking charge of maintaining the law and order during the IYC protest on Wednesday. | FP

‘Get pictures clicked and go from here’

Meanwhile, a video of Bhopal's Deputy Inspector General (DIG) Irshad Wali purportedly standing atop a police vehicle and speaking on a loudspeaker is being shared on social media. Wali is seen directing police personnel to let the protestors sit on the other side of the barricade but not allow them to cross it. “Srinivas bhai (Youth Congress national president) get pictures clicked and go from here. There will be a problem if you get hurt,” he is heard saying. Bhopal: Olympians to be felicitated on arrival today
Advertisement