Meanwhile, the Taliban is facing challenges as the outfit announced a caretaker government in Afghanistan weeks after the takeover of the war-torn country
Agencies 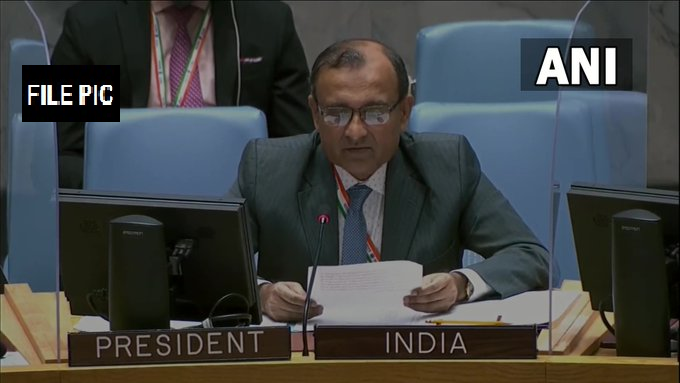 New York: Afghan territory should not be used to threaten or attack any country or to shelter or train terrorists, or to plan or to finance terrorist acts by the Taliban, said India's Permanent Representative to United Nations TS Tirumurti on Thursday.

He also said that Security Council Resolution 2593 has taken note of the Taliban statement that Afghans will be able to travel abroad in an unhindered manner, a statement from United Nations Assistance Mission in Afghanistan (UNAMA) informed.

"We hope that these commitments will be adhered to, including regarding safe, secure and orderly departure from Afghanistan of Afghans and all foreign nationals," Tirumurti added.

He also expressed that India has contributed significantly over the last decade to the development of Afghanistan. Indian development projects have been undertaken in critical areas of power, water supply, road connectivity, healthcare, education, agriculture and capacity building.

India's emphasis has been on the welfare and well-being of the people of Afghanistan. India has undertaken more than 500 development projects in each of the 34 provinces of Afghanistan, Tirumurti informed during his address to the United Nations Security Council.

"We also extended humanitarian assistance through the delivery of 75,000 MT of wheat last year to Afghanistan. We hope that these developments projects and the education and human resource development imparted by India over the years will help in contributing to the development of an inclusive and progressive polity," he added.

Tirumurti is in New York to attend the United Nations Security Council meeting on Afghanistan.

Meanwhile, the Taliban is facing challenges as the outfit announced a caretaker government in Afghanistan weeks after the takeover of the war-torn country.

Only a few days after the Taliban named an acting cabinet to lead the nation, tensions flared with neighbouring Pakistan while Afghanistan's longstanding humanitarian crisis has also deepened, The New York Times informed.

The Taliban is facing intense outrage from the people. Journalists, women and activists including university students, all are holding demonstrations against the outfit while the 'new government' is imposing restrictions to curb the voices rising against it.

Secretary-General Antonio Guterres's Special Representative for Afghanistan, Deborah Lyons, raised the issue of Taliban's leadership being on the UN's list of terrorists.

Of the 33 members of the interim government announced by the Taliban, many are on the UN sanctions list, including Prime Minister Mullah Mohammad Hassan Akhund, the two deputy prime ministers, and Foreign Minister Amir Khan Muttaqi, she said.

"All of you will need to decide which steps to take regarding the sanctions list, and the impact on future engagement," she told the Council.

Lyons added that the protest around the country "show that the Taliban have won power, but not yet the confidence of all Afghan people".