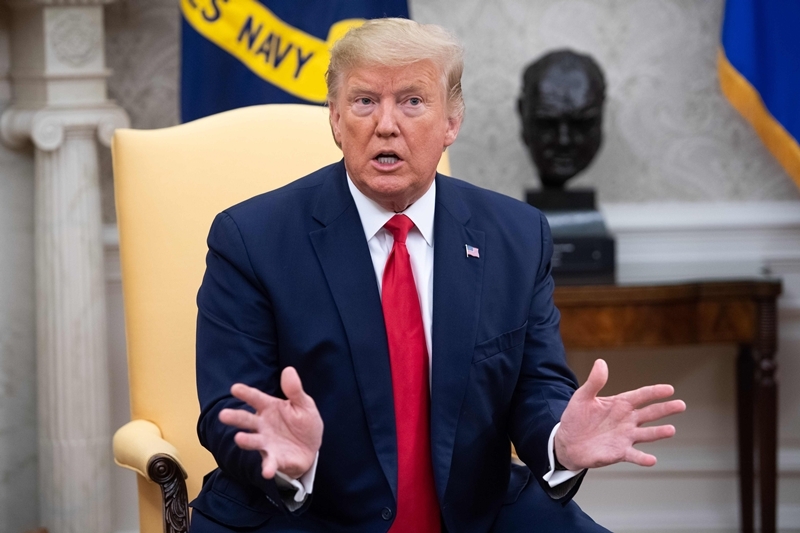 Washington: Republicans are prepared to press ahead with rules for US President Donald Trump's impeachment trial, the Senate leader said, ignoring opposition Democrats who want assurances that witnesses can be called.

Mitch McConnell on Tuesday said he has the backing in his majority caucus to pass a set of rules for the trial unilaterally -- leaving the issue of witnesses and documents until after the historic proceedings have begun.

"We have the votes, once the impeachment trial has begun, to pass a resolution (setting up) what could best be described as a phase one," that lays out arguments of the prosecution and defense, and a period of written questions by senators, McConnell said. No action can be taken, though, until House Speaker Nancy Pelosi transmits the articles of impeachment -- one for abuse of power, the other for obstruction of Congress -- to the Senate.

Pelosi has withheld the articles since the House impeachment vote in December, in a bid to press Republicans for fair trial rules. "They sat on the papers now for three weeks," he said, following the first party lunch since a holiday break. "I hope that'll end this week."

The Democratic-controlled House of Representatives has accused Trump of using military aid and other incentives as leverage to get Ukraine to investigate Democrat Joe Biden, his potential November presidential opponent, and then preventing Congress from fully investigating.

McConnell said he wants the ground rules for the upcoming trial to mirror those from 1999 when president Bill Clinton faced his impeachment trial.

Senators at the time voted unanimously to approve the first set of rules, only afterward debating the relevance of calling witnesses. "All we're doing here is saying we're going to get started in exactly the same way that 100 senators agreed to 20 years ago," McConnell said.

"We'll get around to the discussion of witnesses." Top Senate Democrat Chuck Schumer cried foul, insisting "there will be votes" on whether to subpoena key documents and four witnesses whom Democrats want to testify.

They include Secretary of State Mike Pompeo and John Bolton, Trump's former national security advisor who said Monday he would testify if subpoenaed.

Bolton could be a critical witness as he is known to have spoken directly with Trump about the freeze on aid to Ukraine. Schumer issued a challenge to Republicans, mindful that he needs just four defectors to pass a rule allowing witnesses.

"Will they stand for bringing evidence forward?" he asked. "Or will they be engaging in a cover-up?" Trump said he was ready for the trial, come what may. "Whatever it is, it's a hoax," he told reporters at the White House.