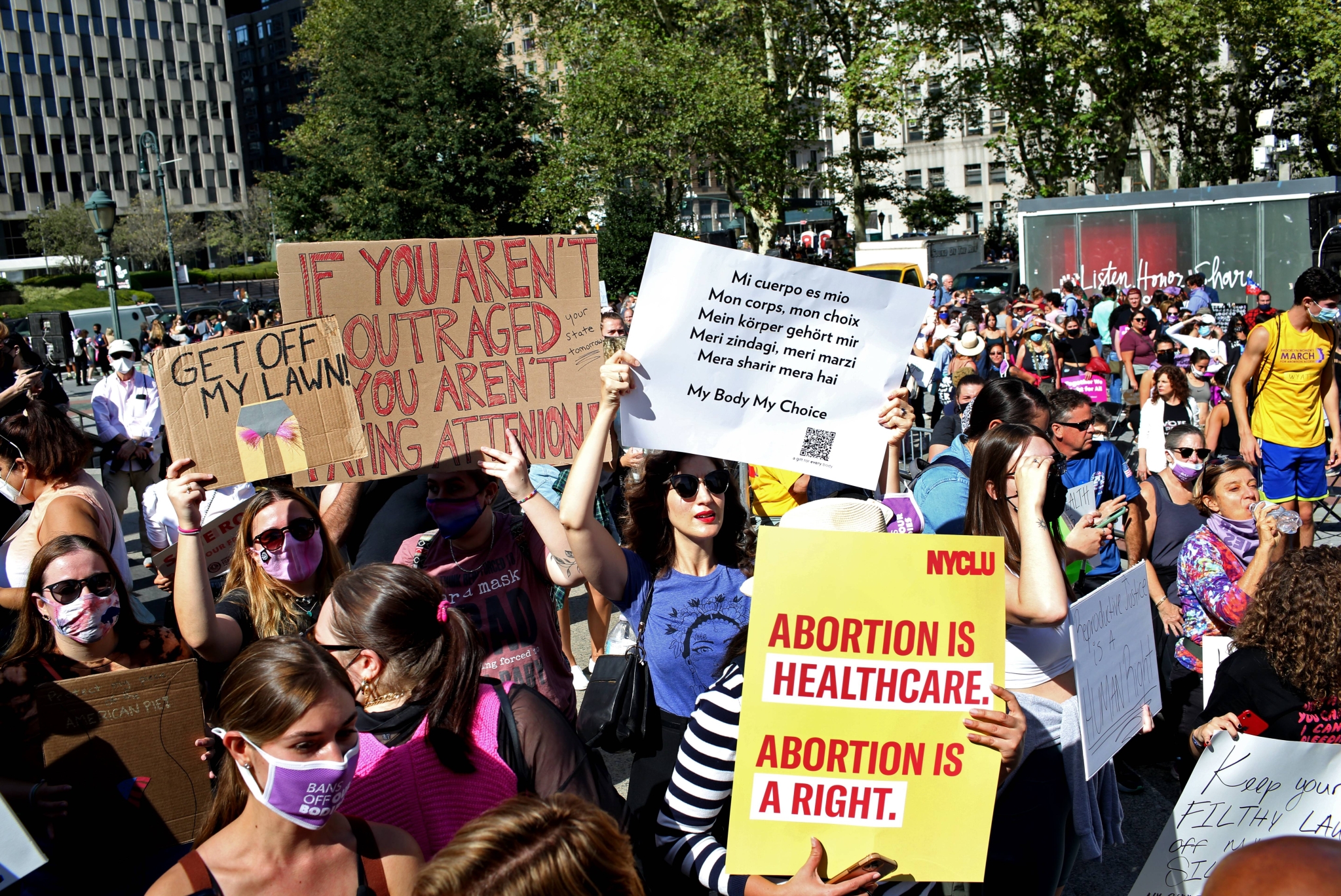 Tens of thousands of people have marched at rallies across all 50 US states in support of abortion rights.

They have been galvanised in opposition to a new Texas law that severely limits access to abortions in the state.

Pro-choice supporters across the country fear that constitutional rights may be rolled back.

In the coming months, the Supreme Court is set to hear a case that could overturn Roe v Wade - the 1973 decision that legalised abortion nationwide.

The start of the rally was disrupted by some two dozen counter-demonstrators.

"The blood of innocent babies is on your hands!" shouted one man, but he was drowned out by the singing and clapping of the crowd, the Washington Post newspaper reported.

One woman who attended a march said she was there to support a woman's right to choose.

"While I've never been faced with that choice fortunately, there are many women who have and our government and men have no say in the outcome when it comes to our bodies," Robin Horn told Reuters news agency.

The rallies were organised by those behind the annual Women's March - the first of which drew millions of people to protest a day after the inauguration of former President Donald Trump in 2017.

"This is kind of a break-glass moment for folks all across the country," said Rachel O'Leary Carmona, the executive director of Women's March.

"Many of us grew up with the idea that abortion would be legal and accessible for all of us," she added. "Seeing that at very real risk has been a moment of awakening."

"I'm sick and tired of having to fight over abortion rights," she said. "It's settled law in the nation and you are not taking that right away from us, not now not ever".

Another of the rallies was in Austin, Texas, where the state's legislature on 1 September enacted a law banning terminations after the detection of what anti-abortion campaigners call a foetal heartbeat - a point when many women do not know they are pregnant.

The so-called Heartbeat Act also gives any individual the right to sue doctors who perform an abortion past the six-week point. Supporters say its aim is to protect the unborn.

Politicians in several other Republican-dominated states are considering similar restrictions.

Rights groups asked the Supreme Court to block the Texas law, but the justices ruled 5-4 against granting this.

On 1 December the court is set to hear a challenge to Mississippi's 15-week ban on abortion.

The verdict could upend the court's 1973 landmark Roe v Wade ruling, which protects a woman's right to an abortion until viability - the point at which a foetus is able to live outside the womb, generally at the start of the third trimester, 28 weeks into a pregnancy.