As fuel reserves hit rock bottom with supplies barely enough for just one more day, government spokesperson Bandula Gunawardana said the sales ban was to save petrol and diesel for emergencies

A motorcyclist who ran out of fuel was towed along a street in Colombo, Sri Lanka, on Saturday | AP

Cash-strapped Sri Lanka has announced a two-week halt to all fuel sales except for essential services and called for a partial shutdown as its unprecedented economic crisis deepened.

The south Asian nation is facing its worst economic meltdown since gaining independence from Britain in 1948, and has been unable to finance even the imports of essentials since late last year.

As fuel reserves hit rock bottom with supplies barely enough for just one more day, government spokesperson Bandula Gunawardana said the sales ban was to save petrol and diesel for emergencies.

Sri Lanka has run out of oil

Sri Lanka has run out of fuel, according to a report Monday in the country’s Daily Mirror newspaper.

The 1,100 tons of petrol and 7,500 tons of diesel the country has would not last a day, the newspaper reported, citing anonymous sources in the Ceylon Petroleum Corporation Trade Union.

According to Reuters, which cited a top government official on Sunday, the country of 22 million people is down to just 15,000 tons of petrol and diesel to keep essential services running in coming days.

Without any deliveries of fuel, the newspaper said, Sri Lanka “will come to a complete standstill from this week, as even public transportation will come to a grinding halt.”

Sri Lanka is the first country to take the drastic step in halting sales of fuel to ordinary people "since the 1970s oil crisis when fuel was rationed in the US and Europe and speed limits introduced to reduce demand", Nathan Piper, head of oil and gas research at Investec, told the BBC.

He said the ban underlined the steep rise in oil pricing and limited foreign exchange reserves in Sri Lanka.

Acute shortages of fuel, food and medicines have helped to push the cost of living to record highs in the country, where many people rely on motor vehicles for their livelihoods.

Sri Lanka is seeking cheap oil from Russia. The cash-strapped country has also sent officials to the major energy producer in a bid to secure cheap oil supplies.

Over the weekend, officials said the country had only 9,000 tonnes of diesel and 6,000 tonnes of petrol to fuel essential services in the coming days.

It has been estimated that the stocks would last for less than a week, under regular demand.

Earlier this month, the United Nations launched an emergency response to the island’s unprecedented economic crisis, feeding thousands of pregnant women who were facing food shortages.

Four out of five people in Sri Lanka have started skipping meals as they cannot afford to eat, the UN has said, warning of a looming “dire humanitarian crisis” with millions in need of aid.

Sri Lanka defaulted on its $51bn foreign debt in April, and is in talks with the International Monetary Fund for a bailout. 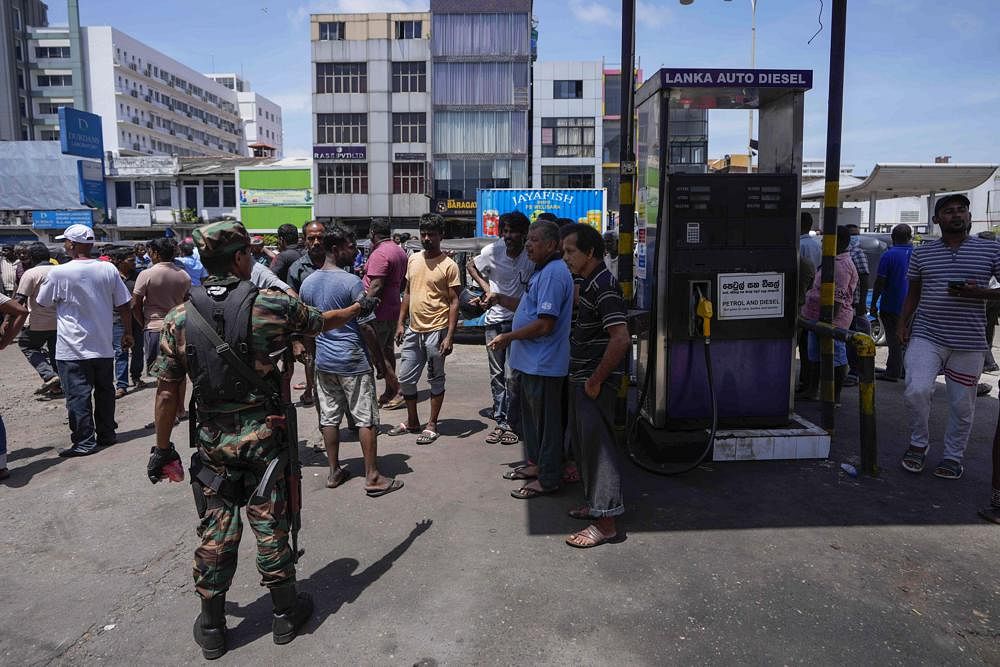