Some passengers even jumped out of the bus to escape the fire, rescue work is underway.

Volunteers gather beside a charred bus on a highway in Nooriabad, Pakistan on Thursday. Police say the bus fire killed over a dozen flood survivors, including children and two women. | AP/PTI
Follow us on

Islamabad: At least 18 flood survivors, including eight children and nine women, died of severe burns in Pakistan, when an overcrowded air-conditioned bus they were travelling in caught fire, police officials said on Thursday.

The incident happened near the Nooribad police station in Pakistan's Sindh province on Wednesday night. The bus with 80 flood-affected people on board, was heading towards Karachi from Khairpur Nathan Shah, in Dadu district, according to Geo.tv.

Deputy Commissioner Jamshoro confirmed that the number of fatalities has risen to 18, which included eight children and nine women, the report said. "The fire may have been caused by a short circuit in the air conditioner," the report said, quoting police officials.

Some passengers even jumped out of the bus to escape the fire, police said.

According to the police, rescue work is underway, and firefighters have rushed to the scene to douse the flames, while the injured were shifted to a local hospital in Jamshoro and Nooribad. Sindh Chief Minister Murad Ali Shah has directed the deputy commissioner and superintendent police of Jamshoro to ramp up rescue efforts.

Murad has demanded a report from officials on the incident. Dadu district is among the worst flood-hit districts in Sindh province.

More than 1,700 people have been killed, 33 million displaced and a third of the country was submerged under water in the worst floods to hit Pakistan, brought about by unprecedented rains since mid-June.

Bus fires are common in Pakistan, where safety standards are compromised and traffic rules are often flouted. 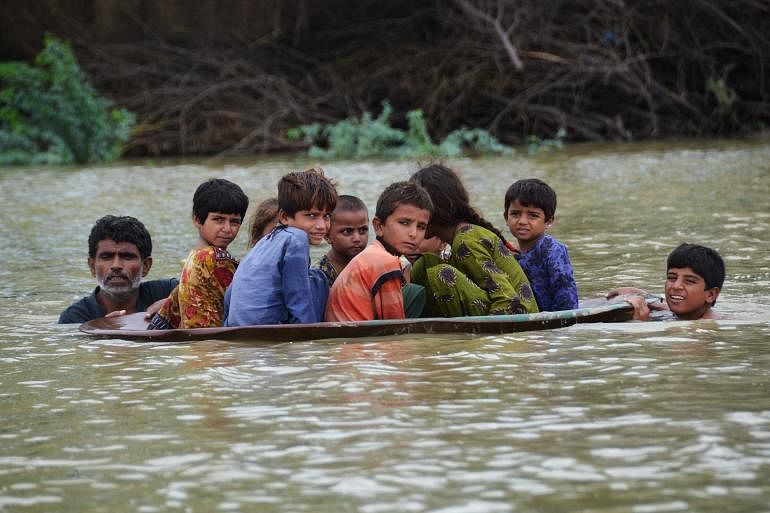