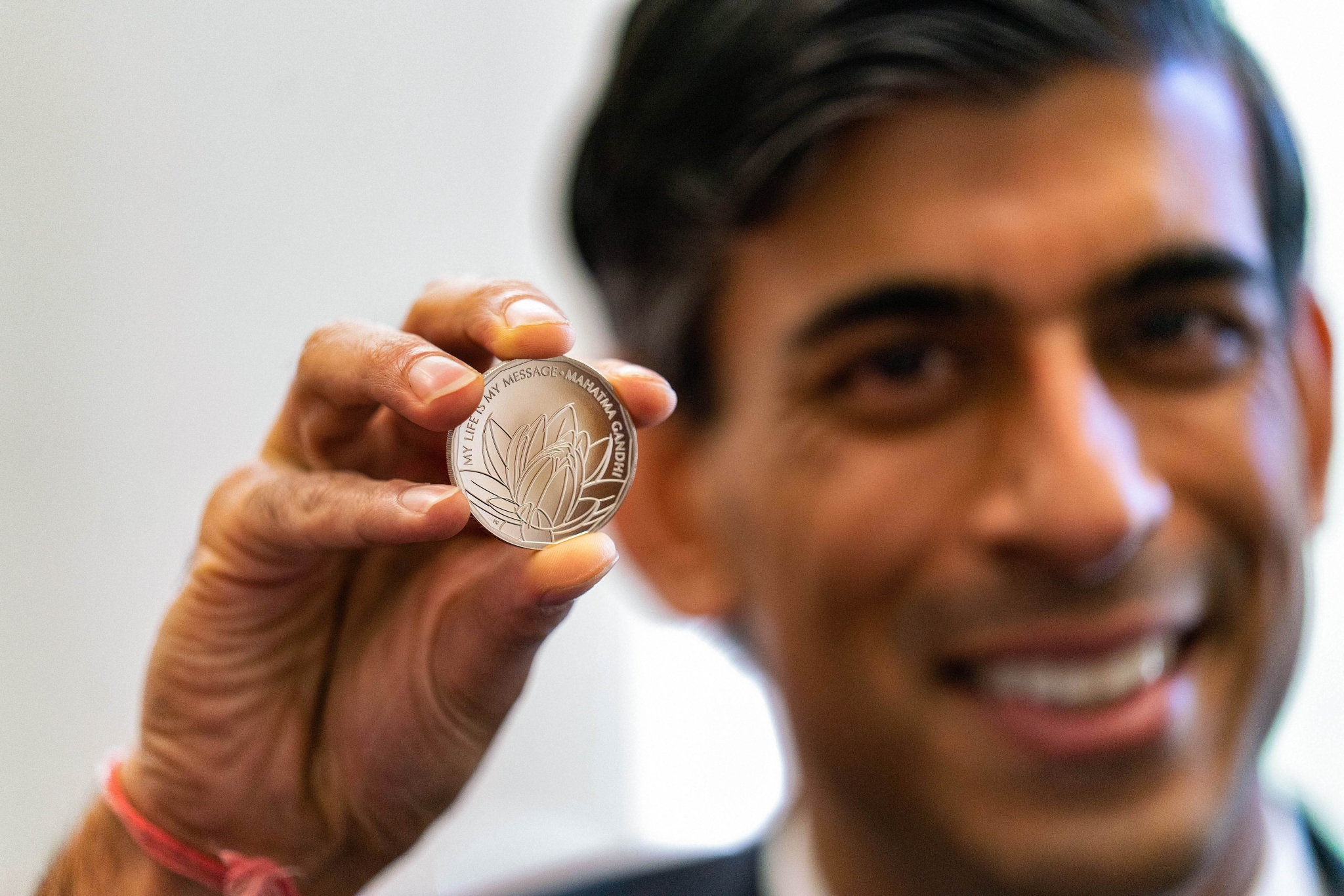 Available in a range of standards, including gold and silver, the special collectors' coin is designed by Heena Glover and features an image of a lotus, India's national flower, alongside one of Gandhi's most famous quotes - "My life is my message".

"This coin is a fitting tribute to an influential leader who inspired millions of people around the world," said Sunak, in his role as the Master of the Mint in the UK.

"As a practicing Hindu, I am proud to unveil this coin during Diwali. Mahatma Gandhi was instrumental in the movement for Indian independence and it is fantastic to have a UK coin commemorating his remarkable life for the first time," said the Indian-origin finance minister.

The commemorative Gandhi coin is said to build on the "enduring relationship and cultural connections" between the UK and India, as India celebrates its 75th year of Independence this year.

The product range, which went on sale on the UK Royal Mint's website from Thursday, includes the commemorative 5-pound collectors' coin - priced at GBP 13 and wrapped in a mini-booklet with information on "Gandhi - Icon of Peace and Liberty".

The range also includes a limited edition "Silver Proof" coin being sold for GBP 95 and a "Gold Proof" version available to order for GBP 2,440. Both the silver and gold versions are offered in a specially packaged box.

"The Mahatma Gandhi 2021 UK Coin is the perfect keepsake to commemorate an icon who changed the world and whose vision of hope, peace and tolerance still resonates more than seven decades after his death," notes the Royal Mint.

"During his lifetime, his followers called him 'Mahatma', which is Sanskrit for 'great soul', and he is still widely recognised by that name today. The Royal Mint is proud to honour one of the greatest figures of the twentieth century with a brand-new design," it added.

The 20g gold Lakshmi bar was designed in partnership with the Hindu community in South Wales, where the Royal Mint is based.

The Mint officials will also join Diwali celebrations at the Shree Swaminarayan Temple in Cardiff, where worshippers will offer prayers to Goddess Lakshmi and lord Ganesha for the coming year.

"As we approach Diwali celebrations, we are delighted to unveil the first official UK coin commemorating the life and legacy of Mahatma Gandhi. The beautiful design builds on the enduring relationship and cultural connections between the UK and India," said Nicola Howell, Chief Customer Officer for the Royal Mint.

Last year, Sunak commissioned the new "Diversity Built Britain" 50p coin following discussion with the 'We Too Built Britain' campaign, which works for fair representation of minority communities' contributions across all walks of life.

Around 10 million of the coins, which recognise and celebrate Britain's diverse history, went into circulation in October 2020.

The new Gandhi coin is a non-circulating commemorative item, available to buy online from the Royal Mint.