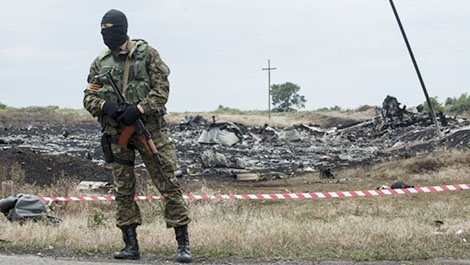 A pro-Russian fighter guarding the crash site of Malaysia Airlines Flight MH17 near the village of Hrabove, eastern Ukraine. |

Sydney: The relatives of seven Australian passengers who died when the Malaysia Airlines flight MH17 was shot down over eastern Ukraine in 2014 on Wednesday reached a confidential out-of-court settlement with the airline.

The five families had joined together for a class action suit against the Malaysian company after the death of seven of their kin. But after negotiations with the airline, they accepted a "reasonable" compensation, their lawyer John Rowe told public broadcaster ABC.

The settlement was reached shortly before an eight-day hearing was set to begin at the Federal Court of Australia, where judge Nye Perram approved the terms of the settlement, Efe news reported citing the Australian broadcaster.

Last week, the Joint Investigation Team probing the case named three Russian officers with police and military backgrounds and a Ukrainian man as responsible for firing the missile that brought down the plane.

On July 17, 2014, the Malaysia Airlines plane was shot down in eastern Ukraine - a region witnessing armed conflict between the Ukrainian Army and pro-Russia separatists - leading to the death of all 298 people on-board, including 193 Dutch citizens.

The airplane, going from Amsterdam to Kuala Lumpur, was hit by a surface-to-air missile launched from an area controlled by pro-Russia rebels. Dutch investigators concluded that a Russian-made Buk missile had been used in the incident.

Moscow categorically rejected the two main arguments of the investigating team. One was that the missile which brought down the plane was fired from an area controlled by pro-Russia separatists and that the launcher had been transported from Russia, where it was carried back after the incident.