'A symbol of patriotism and sacrifice': Netizens take to Twitter to pay tribute to Bhagat Singh on his birth anniversary

Today marks the 114th birth anniversary of Bhagat Singh, who through his countless acts of bravery has inspired souls around the world.
FPJ Web Desk 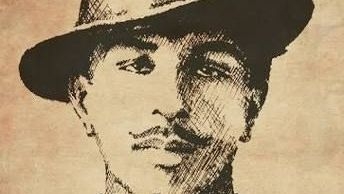 Today marks the 114th birth anniversary of revolutionary freedom fighter Bhagat Singh, who died at the tender age of 23. Bhagat Singh was born on September 28, 1907, and went on to become one of India's most renowned liberation fighters.

Bhagat Singh was a dynamic Indian revolutionary who practised socialism and atheism and was known for his two acts of violence against the British in India, hunger strike in jail, and his execution. His death energised an underlying militancy in India, prompting immediate action inside the Indian National Congress's ultimately victorious nonviolent independence fight.

In December 1928, Bhagat Singh and an associate, Shivaram Rajguru, both members of the Hindustan Socialist Republican Association, shot and killed a 21-year-old British police officer, John Saunders, in Lahore, Punjab, Pakistan, mistaking Saunders, who was still on probation, for British police superintendent James Scott, whom they had planned to assassinate. They blamed Scott for the death of Lala Lajpat Rai, a popular Indian nationalist leader, after he ordered a lathi charge in which Rai was hurt and died of a heart attack two weeks later.

Singh's involvement in the John Saunders case was revealed as a result of his arrest and subsequent publicity. Singh won popular sympathy while awaiting trial after joining fellow defendant Jatin Das in a hunger strike for improved jail conditions for Indian prisoners, which ended in Das's death from starvation in September 1929. Bhagat Singh, who was 23 years old at the time, was convicted of the murders of John Saunders and Channan Singh and hung in March 1931. After his death, he became a beloved folk hero, who is still remembered even today.

Have a look at how netizens have paid their tribute to the brave soul who never hesitated to risk his own life for his country:

The brave Bhagat Singh lives in the heart of every Indian. His courageous sacrifice ignited the spark of patriotism among countless people. I bow to him on his Jayanti and recall his noble ideals. pic.twitter.com/oN1tWvCg5u

Humble tributes to Shaheed e Azam Bhagat Singh on his birth anniversary. He was an epitome of courage and patriotism, who made the supreme sacrifice for the cause of India’s independence. His ideals & martyrdom would inspire generations to come. pic.twitter.com/7CT6W3a9YJ

Remembering Shaheed-e-Azam Bhagat Singh, a symbol of patriotism, valor and sacrifice, on his birth anniversary. You're an icon of anti-caste fight. Salutes!! pic.twitter.com/yGcw6PsY5S

Tributes to one of the greatest freedom fighter Bhagat Singh ji on his birth anniversary.
His valour and patriotism will always continue to inspire us. pic.twitter.com/oU89c3m9qS

Remembering the brave, Shaheed #BhagatSingh on his Birth Anniversary. pic.twitter.com/eLgcOH3WZ6

He was the man who was completely fearless,offered himself as the sacrifice for the good of others. pic.twitter.com/sKjAg3Za76

"They may kill me, but they cannot kill my ideas. They can crush my body, but they will not be able to crush my spirit"
~ #bhagatsingh 🙏❤️ World Tourism Day 2021: With focus on responsible and sustainable travel, here's what India is doing...