Warsaw: Phoenix of the Polish Land

Warsaw, which has risen from the ashes of its past, is a new city where reminders of the past continue to surface. A fascinating and languid city, part European and part Oriental, a melting pot of different races; a little crazy, but also courageous to the point of heroism. 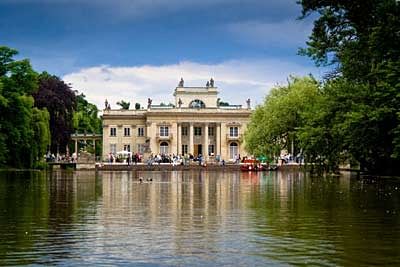 A city that was razed to the ground during the Second World War first by air bombardment, then by shelling and finally by house to house fighting.

But, that Warsaw has risen again. Identical just as it used to be.

It was born again thanks to the will of the Polish people who, by rebuilding it brick by brick, sought to bury the past.

Warsaw is also a city of memories.

A city to visit in the wake of the reminders that surface in the district where Ghetto used to be, one of the most famous ghetto in the whole of Europe, which turned out scientists and musicians, mathematicians and poets, holy rabbis and orthodox devotees. All this is gone now. Nothing has been left of the great Jewish presence, and only touching monuments remind us of the tragedy of the Ghetto and of the truck load of after truck load of Jews that left from Umschlag Platz for the concentration camps. And, the desperate and heroic resistance of the few survivors who, in 1943, rebelled against the Nazi genocide and for two months – hidden in bunkers – kept the SS in check. Then the Germans suppressed the insurgence; the Ghetto was raged to the ground and disappeared forever.

But if Warsaw rose again from the ashes of the War it has also been reborn from the drabness of the Stalinist era. After the fall of the communist, winds of change swept through the city. New shops, new hotels and more cheerful air have transformed Warsaw and are making it more beautiful. Old buildings have been cleaned, elegant boutiques are springing up and in them Poles have started savouring the first hints of an affluent society. The best symbol of this rebirth is the citys tallest building at the end of Nowy Swiat, which was once the Communist Central Committee seat and is now the expression of Polands wanton capitalism – the stock exchange.

The Vistula River splits the city, with the downtown and the Old Town area on the left, higher bank, and the Praga housing suburb on the right. The Old Town is just north of the Slasko- Dabrowski Bridge. Most sights and activities of interest to tourists are to be found between this area and Lazienki Park.

The true heart of the city is the Old Town ( Stare Miasto). Dating from the fourteenth century, it is mixture of Renaissance and Baroque building around a central place. Every detail from the wrought iron shop signs to the widening medieval streets was lovingly restored after the Nazi destruction of WW II. A block south of the square is St.

Johns Cathedral, where Cardinal Priests delivers the homily to the deeply religious Roman Catholic Poles. Old walls that once fortified the city and the Barbican, a sort of tower house of the mid- sixteenth century, have been reconstructed and add to the atmosphere of the district.

At the Zamkowy Square of the Old Town stands the Royal Castle. The castle was reopened in 1979, after 35 years of painstaking effort to rebuild this important symbol of the continuity of Polish history. Its imposing silhouette forms an impressive background to King Sigimunds Column in the Middle of the square. The rooms inside the castle are as stunning as they were before the palace was destroyed.

The huge green woodland called Lazienki Park is the largest city park of Europe. And, its centrepiece is the splendid Lazienki Palace, situated on an island. There are some eighteen other palaces and monuments in this spacious park, including the original White House, once the residence- in- exile of the future king Louse XVIII of France.

The magnificent monument to Chopin at the southern end of the park is the scene of Sunday afternoon Chopin concerts. Poles love music, particularly Chopin. But, anyone intent on wallowing in Chopin should spend a few hours in Zelazowa Wola, his birthplace, 45 kms from the capital. In the house where he was born there is always a pianist to create the right atmosphere for the visit.

One sunny morning, I took bus no.

521 to go to the Wilanow Palace complex – located at the outskirts of the city. It ranks among the most beautiful palace in Europe. This Polish version of Versailles is considered to be one of the most precious historical monuments in Poland. Its baroque terraces lead to a small lake formed by a bend at the Vistula river.

Sitting in the well- groomed park, in between the palace and the lake, one can spend endless hours just contemplating about the glorious past of Poland.

Warsaw is also a city of war memorials and monuments. The citys monument to the heroes of WWII is a huge monolithic fighting goddess with sward raised. But, the most significant monument – that of the Jewish Ghetto uprising of 1943 – is small one on a little grassy square.

But, Varsovians do not like to live in their somber past. In the evening, Warsaw reveals its true self and speaks with its mysterious and innermost voice. In the tightlypacked, cosy bars in the Old City of the Vodka flows or you can try a glass of ” Barszc”, a broth of sour beetroot that, according to naturists, is very beneficial. It is in such places and atmosphere where the true Slavic charm of the city is best felt.

HomeTravelWarsaw: Phoenix of the Polish Land