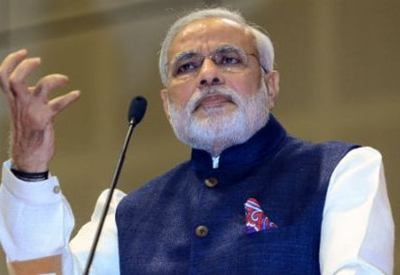 Ranchi: The Congress manifesto is “a bundle of lies”, BJP’s prime ministerial candidate Narendra Modi said Thursday, and called for a law to ensure that ruling parties implemented their promises.

“The Congress manifesto is a bundle of lies,” Modi told an election rally in Jharkhand’s Gumla district.

“The Congress had promised jobs to everyone, and the same promises have been made again. The manifesto is a bundle of lies.”

The Gujarat chief minister said the Election Commission should frame a legislation so that parties which win elections should be made answerable vis-a-vis the promises made in their manifestoes.

“This will prevent the lies (from getting into) the manifesto.”

Modi also accused the Congress of ignoring tribal interests all over the country.

“It was the Atal Bihari Vajpayee government which formed a separate tribal welfare ministry,” he said.

“In states where tribal population is more, like Chhattisgarh, Madhya Pradesh, Rajasthan and Gujarat, the tribals are giving a chance to the BJP to govern them”.

He came down heavily on the Maoist guerrillas.

“I bow to you people for coming to this rally in large numbers despite a Maoist strike. This shows the strength of democracy. Democracy is more powerful than the gun.”

He reminded people that it was a Bharatiya Janata Party government led by Vajpayee which formed Jharkhand by carving it out of Bihar.

“If the Congress had been in power at the centre, Jharkhand could not have been created.”