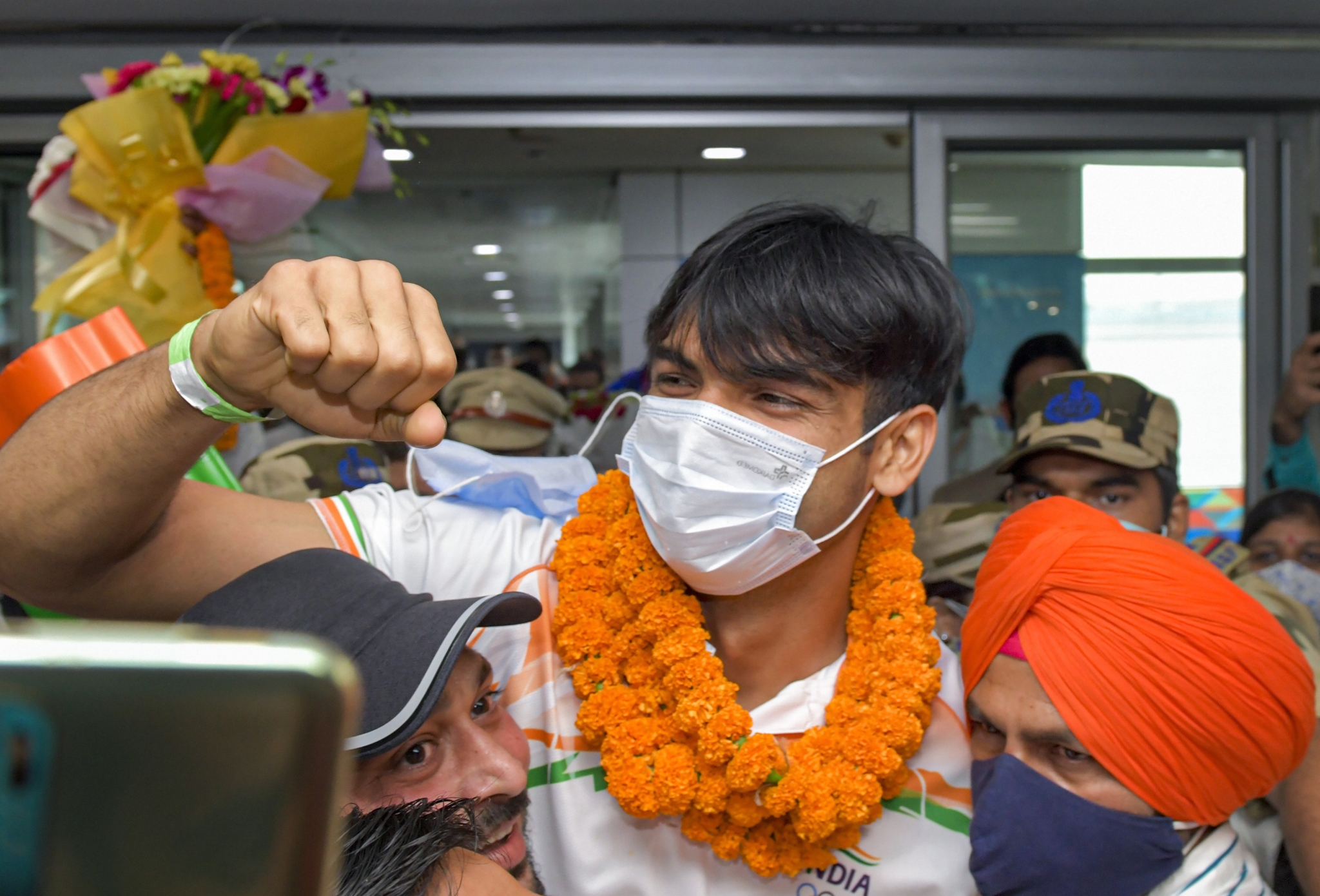 New Delhi: India's triumphant Olympic contingent, including history-making javelin throw gold-medallist Neeraj Chopra, returned to the country on Monday and was greeted by frenzy and chaos at the airport where supporters jostled to catch a glimpse of their sporting heroes.

The athletes were welcomed by a Sports Authority of India (SAI) delegation headed by its Director General Sandeep Pradhan, who was accompanied by Athletics Federation of India head Adille Sumariwala.

There was loud cheering by euphoric fans, family members, and some local political leaders as returning athletes made their way through a massive crowd both inside and outside the airport.

Waving the tri-colour, people danced to the beat of the dhol and live band, sang and screamed their lungs out to show their appreciation for the medal winners.

Some were even seen doing push-ups and planks just outside the airport in their enthusiasm. Inside, Chopra and other medal winners struggled to get past a selfie-seeking crowd.

"We are here to support our heroes. We are proud of them," said a young girl, who claimed to be a budding athlete herself.

The most dramatic exit was made by bronze-medallist wrestler Bajrang Punia, who was seen greeting and waving towards his supporters from the sunroof of an SUV, which had several fans clinging to it defying all traffic rules as it made its way out of the airport.

"We will try to do better next time, I had a knee problem," Punia, who had entered the Games as a gold favourite, said.

The athletes were garlanded and presented with bouquets on arrival and were applauded by the airport staff as they made their way out to utter chaos.

They were then whisked away for a felicitation function by sports minister Anurag Thakur later this evening.

"It is the first time we are seeing a reception like this, it is very heartening," said race walker K T Irfan, who competed in the 20km race walk event.

India surpassed their previous best haul of six medals achieved in the 2012 London Games with one gold, two silver and four bronze medals in Tokyo.

While Chopra added the golden sheen to the campaign, the silver medals came from weightlifter Mirabai Chanu and wrestler Ravi Kumar Dahiya.

The spotlight, however, is bound to target Chopra, whose gold was India's first in 13 years overall and the first ever in the track and field events.

The 23-year-old Army man is also an Asian and Commonwealth Games champion and bossed the field with a throw of 87.58m in the finals to comfortably claim the gold in Tokyo.

Of the medal winners, Chanu and Sindhu had returned to the country a few days earlier after the completion of their events as COVID-19 protocols required athletes to leave Tokyo within 48 hours of the medal ceremony.

India had sent a 228-strong contingent for the Games, including more than 120 athletes.

The Olympi champions were accorded a grand welcome by the government in a dazzling felicitation ceremony here on Monday with sports minister Anurag Thakur saying that their journey is an incredible story of resilience and sporting excellence.

Gold medal winning javelin thrower Neeraj Chopra was the cynosure of all eyes in the ceremony at a five star hotel here, held a couple of hours after the seven podium finishers made their way out of the airport amid utter chaos.

At the felicitation ceremony, they were presented mementos and shawls by the minister.

Both the bronze-winning men's hockey team and fourth-place finishing women's team cut cakes after arriving at the hotel.

"W all come from middle-class families and support of the families is essential," Chopra said after being felicitated by Thakur.

While Chopra added the golden sheen to the campaign, the silver medals came from weightlifter Mirabai Chanu and wrestler Ravi Kumar Dahiya.

"It feels great, I would like to thank the government, SAI and IOA for helping us during our quarantine time. They gave us all the support," said men's hockey captain Manpreet Singh.

"I am very happy to be back home. I knew India is very happy but after coming back here, to get this love first hand, it feels really nice. I would try to do my best for more such medals," Borgohain said.

Sindhu and Chanu did not attend the ceremony as they had arrived earlier and are currently at their home bases.

"I only tried to give my best," said Punia, who fought through his semifinals without any protective gear on his injured knee.

Among those present on the occasion to felicitate the medal winners also included Union Minister of Law and Justice Kiren Rijiju, Secretary (Sports) Ravi Mittal and Director-General of Sports Authority of India Sandip Pradhan.

"Tokyo 2020 was an Olympic Games of many firsts for India. The success of Team India at the Olympics is a reflection of how New India desires and aspires to dominate the world…even in sports," Thakur said.

SINGAPORE: Singapore-based Global Indian International School (GIIS) announced on Monday a special scholarship for the children of Indian sportspersons who represented their country at the recently-concluded Olympic Games in Tokyo.The 'GIIS Olympians Scholarship' is a special gesture of thanks to the extraordinary sportspersons who represented the country at the highest sporting event this year, and showed pure determination and grit to carry the hopes of 1.3 billion Indians. It will be offered to children of any member of Indian Olympic contingent - including the 7 medal winners as well as those who represented India in the games that concluded on Sunday. This is the first time any child of the Olympians can now study at any of the GIIS schools in India. "India has done extremely well in the Tokyo 2020 Olympics, and our scholarships are a way of thanking the athletes and sportsmen who gave their sweat for the country," said Atul Temurnikar, Chairman of Global Schools Foundation which runs GIIS. "A scholarship of this nature, not only recognises the Olympians, but also encourages their children to receive world class education and to pursue sports or any other passions they may have," Temurnikar said.