France president Emmanuel Macron paid a visit to the Moroccan dressing room after Les Bleus’ 2-0 win in the semifinal of the FIFA World Cup 2022 on Wednesday.

Macron travelled to Qatar to watch the defending champions seal their place in a second consecutive World Cup final.

Theo Hernandez and Randal Kolo Muani scored in a 2-0 win for France.

Fiorentina's Amrabat was a standout throughout the tournament and was personally hailed by Macron.

According to Italian journalist Fabrizio Romano, Macron said in front of the Morocco squad that Amrabat was the best midfielder of the tournament.

Been told France president Emmanuel Macron has visited Morocco’s dressing room after the game and told Sofyan Amrabat that he has been “the best midfielfer of the tournament” in front of all the squad. 🇲🇦🤝🏻 #Qatar2022 pic.twitter.com/Ya9dOlB7u8

Macron said he was "immensely proud" that France reached the World Cup final.

Macron sat beside FIFA president Gianni Infantino during the match at Al Bayt Stadium and stood up to applaud after the 2-0 victory. France will play Argentina in the final on Sunday.

"I feel very proud of my country. I'm very happy," Macron told reporters after the match. "I want the French to enjoy this simple happiness." The French leader paid tribute to the "great" Moroccan team, Africa's first-ever semifinalist.

Morocco was ruled by France from 1912-56. Wednesday's match had political and emotional resonance for both nations, dredging up everything that's complex about the relationship in which France still wields considerable economic, political and cultural influence.

Macron said he will come back to Qatar on Sunday to attend the final at Lusail Stadium. He joked about being "too superstitious" to give his prediction. But before the match against Morocco, he was quick to say "France will win."

During his trip to the Gulf nation, he also visited a bazaar in Doha, the Qatari capital. Macron walked through a crowd at Souq Waqif wearing a scarf with the colors of the Qatari flag before getting into a car amid heavy security for the 50-kilometer (30-mile) trip from Doha to Al Khor for the match.

Macron skipped a summit of European Union and southeast Asian leaders in Brussels to attend the match. 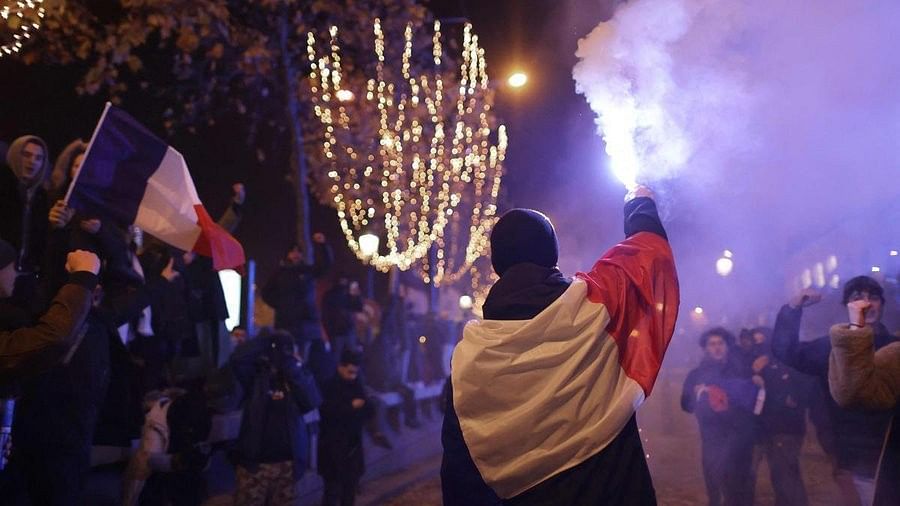