In what was a game of two halves, Sunil Chhetri's brace put India in the driver's seat in the first half before Tajikistan scored four goals after the breather to win the game. India could have restored their two-goal lead in the very next minute if it wasn't for an uncharacteristic miss by skipper Chhetri.
IANS 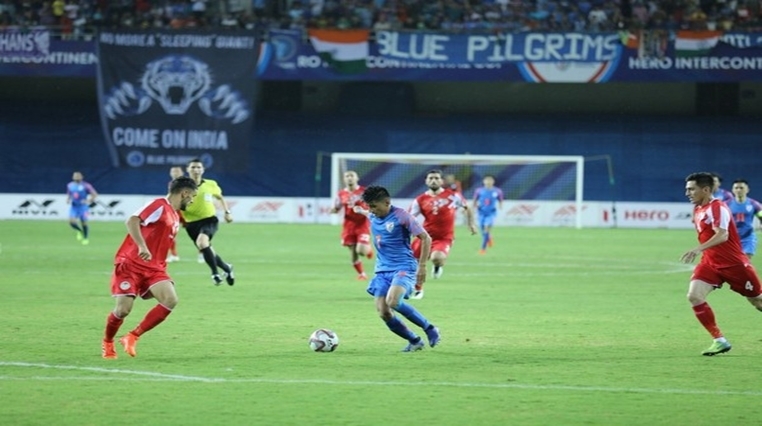 Ahmedabad: India squandered a 2-0 first half lead to lose 2-4 against Tajikistan in the opening match of the four-nation Intercontinental Cup here on Sunday.

In what was a game of two halves, Sunil Chhetri's brace put India in the driver's seat in the first half before Tajikistan scored four goals after the breather to win the game. After Tajikistan squandered a number of chances in the first half, Komron Tursunov opened the scoring for the visitors in the 56th minute after his initial shot was blocked by Indian goalkeeper Gurpreet Singh Sandhu.

India could have restored their two-goal lead in the very next minute if it wasn't for an uncharacteristic miss by skipper Chhetri. Udanta Singh made a low cross from the right and set up a tap-in for Chhetri but the 34-year-old ended up hitting it over the crossbar. Tajikistan levelled the score in the minute after that. Mandaro Rao Desai squandered possession in a dangerous area and young Narender Gahlot could not anticipate the cross that ended with Sheriddin Boboev scoring the goal.

Tajikstan dominated play after that and in the 71st minute, Muhammadjon Rahimov raced past Adil Khan and put the ball between Sandhu's legs into the goal. Three minutes later, Samiev scored the fourth. India were completely out of the match after that as Tajikistan saw off the game.

The first half was quite a different story though. Though Tajikistan enjoyed more possession and took more shots at the goal, six as opposed to India's three, only one of those was on target. That was a free-kick by Ehson Panjshanbe in the 28th minute which went straight into the hands of Sandhu.

On the other hand, all of India's three attempts were on target and two of them led to goals. Lallianzuala Chhangte earned India a penalty in the third minute when he was fouled by Siyovush Asrorov at the end of a nicely built counter-attack involving Mandar and Sahal Abdul Samad. Chhetri stepped up and chipped the ball into the goal as the Tajikistan goalkeeper went the other way. It was Chhetri's 69th goal for India.

His 70th came in the 41st minute when he managed to get to the end of a cross from Udanta Singh. Some loose defending from Tajikistan gave Chhetri enough time inside the box to find his spot and he made no mistake with the shot.

The visitors could have restored parity just a couple of minutes after Chhetri converted the penalty had it not been for some poor finishing by Sheriddin Boboev. Muhammadjon Rahimov sent in a cross from the left and Narender Gahlot seemed to have arrived in time to nip the ball away before Boboev got to it. But he was too early and Boboev only had the keeper to beat. However, his shot however rolled past the far post and India were let off.

India will clash with DPR Korea in the second match of the tournament on July 13.