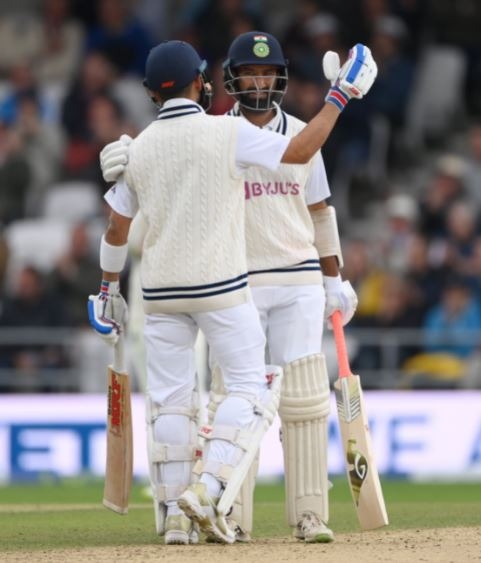 Leeds: After a horror two days, India fought back through some sublime batting by Rohit Sharma (59), Cheteshwar Pujara (91*) and Virat Kohli (45*) as they were 215 for two when the stumps, here on Friday.

At stumps, India still trailing by 139 runs with eight wickets in hand. For the visitors, Pujara (91*) and Kohli (45*) are at the crease.

Resuming the final session, India did not get off to an ideal start as Rohit (59) was sent back to the pavilion by Ollie Robinson. The right-handed batsman was given out on the field, however, he opted for a review, but the verdict came out to be umpire's call, and hence, Rohit had to walk back to the pavilion.

Skipper Kohli then joined Pujara in the middle and the duo moved the scoreboard slowly and steadily. Both batsmen kept England's attack at bay and in the end, ensured that India enters Day 4 with eight wickets in hand. Kohli and Pujara have extended their third-wicket partnership to 99 runs.

Earlier, Rohit Sharma and Cheteshwar Pujara ensured that India kept England bowlers at bay in the second session. At the tea break, India's score read 112/1-- still trailing by 242 runs with nine wickets in hand. For the visitors, Rohit (59*) and Pujara (40*) are at the crease.

Resuming at 34/1, Rohit and Pujara gave India a little respite as both batsmen looked firm at the crease, and they mixed caution with aggression, keeping the English bowlers at bay. England had the chance to send Rohit back to the pavilion in the 32nd over, but Joe Root did not opt for the review and Rohit got a reprieve.

Rohit then brought up his half-century in the 38th over of the innings. He along with Pujara ensured that India does not lose any more wickets before the tea break.

Earlier, English bowler Craig Overton struck at the stroke of lunch to send India opener KL Rahul back to the hut as the hosts strengthened their grip on the third Test at Headingley, Leeds, on Friday.

Trailing by 354, India openers Rohit and Rahul were rock solid and the duo saw out the opening spell of major threat James Anderson. Both batters brought out their A-game to the middle and the visitors did not lose any early wicket. But the partnership was broken just when the two would have hoped to take India to the break without losing any wicket. For the hosts, it is just the boost they would need to come back strongly after the break.

Earlier, Mohammed Shami scalped four wickets as England was bowled out for 432 in the opening session. A 354-run lead put the hosts in the driver's seat as skipper Joe Root top-scored with a knock of 121.

Resuming Day 3 on 423/8, England overnight batters Craig Overton and Ollie Robinson added eight more runs to the total before Overton (32) was caught plum in front by Mohammed Shami and as a result, England was reduced to 431/9. Jasprit Bumrah bowled Robinson (0) in the very next over, and as a result, England was bowled out for 432 in the first innings. England captain Joe Root completed his 23rd Test ton as the hosts gained full command against India on Day 2 of the ongoing third Test on Thursday.

James Anderson not out 0