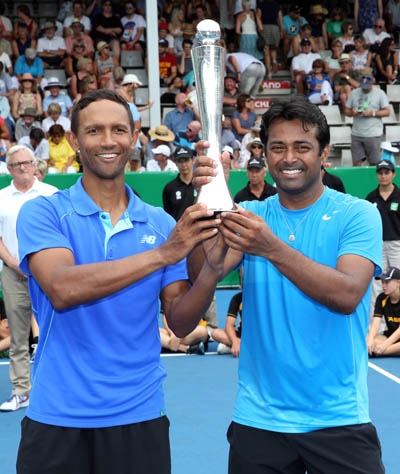 It was the second consecutive final for Paes and Klassen, after finishing runners-up at the Chennai Open.

Stronger service helped the fourth seeds edge their opponents in the first set. Both teams were poor with their breakpoints conversion and failed to grasp their chances and in the end it had to be decided in the tie-break.

The second set was again a close affair but Paes and Klaasen managed to convert two breakpoint opportunities out of five to take home the title.

They surely go into the first Grand Slam of the season as serious contenders.

The new pairing has clicked in no time as they had ended runners up the Chennai Open, which was their first tournament together.

Paes, who has now won a title every year since 1997, was all praise for his new partner.

“We’re really happy, but at the end of the day, it’s a long season. We keep each other happy. We’ve got to take it to them every day that we play.”

Sydney: Indo-Canadian pair of Rohan Bopanna and Daniel Nestor won the Apia tennis tourney defeating Jean-Julien Rojer and Romanian Horia Tecau 6-4, 7-6 (5). “We played a few tournaments to prepare for this year as well as we could and things didn’t go as well, but I think right now we’re clicking. I enjoy playing with Rohan, he’s one of those guys who’s intimidating to play against.”