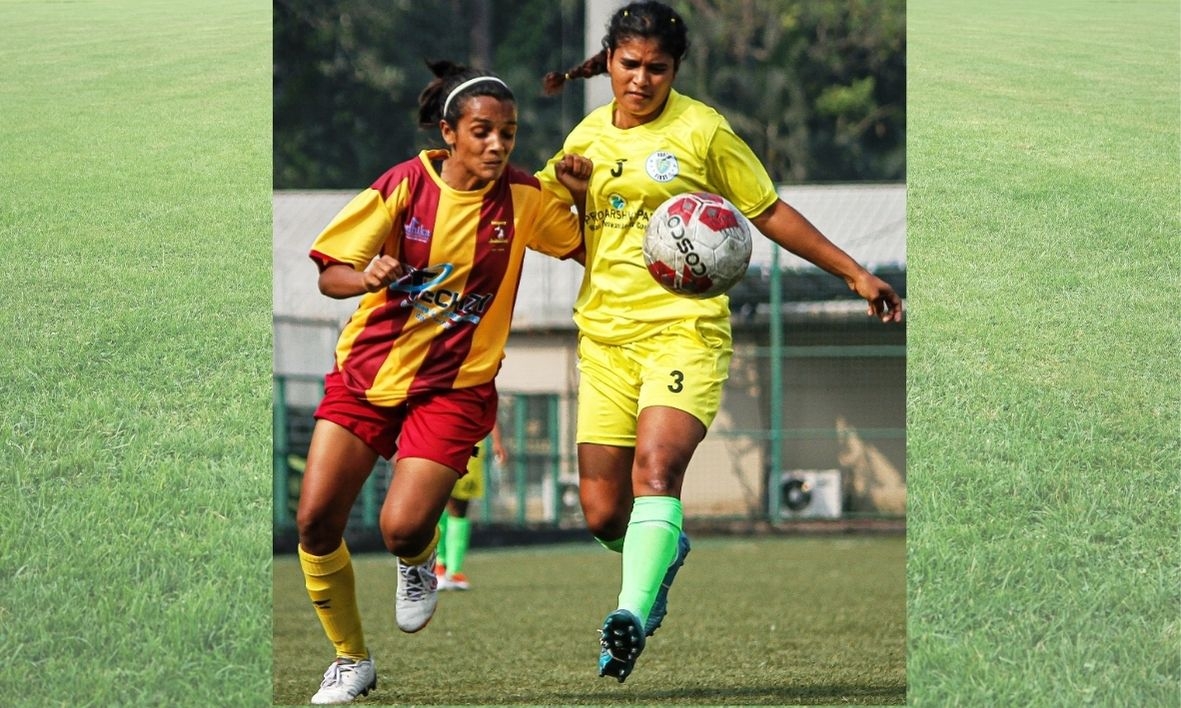 Action from the match between Footie First and Snigmay FC |

The opportunistic goal-scorer Atisha scored the first goal in the 16th minute and 15 minutes later netted her second goal to double Footie First lead to 2-0 at the break. In the second half, Atisha completed her hat-trick scoring the third goal in the 52nd minute before Mamta Kumari converted a penalty in the 69th minute to complete the margin of victory.

Earlier, Amma FC, Nagpur produced a strong fighting performance and managed to get the better of a determined Pacangan FC, Satara by a 2-1 margin in another fifth-round match played in the morning.

Super substitute Revati Kokare, who replaced Rinky Yadav midway through the first half was Amma FC’s star performer as she scored both goals, one on either side of the interval, to secure their win. Pacangan FC girls showed plenty of resilience and managed to stay in the fight as striker Kumari Shikalgar scored the equalising goal in the first half.

The match between Amma FC and Pacangan FC witnessed a lively contest for supremacy and there were quite a number of goalmouth thrills at the two ends.

The Nagpur side against the run of play grabbed the lead when Revati cashed in an opening to slot home the opening goal in the 37th minute. But, the Satara girls came roaring back and two minutes later Kumari booted home to help her team draw level.

After the change of ends, Revati was once again in the thick of the action and scored hers and the team's second goal to regain the lead, which they managed to hold on till the final whistle to troop out worthy winners.

Put into bat, Brain-4 Sports boys, barring opener Yagnik Dange (39), were all at sea and were bundled out for 107, with Asles Swain (6/10) claiming the bowling honours. In reply, Pro-World Talent boys too faced some anxious moments as they lost seven wickets for 81 runs before Aryan Pawar, coming at No.7, bailed them out with an unbeaten 48.