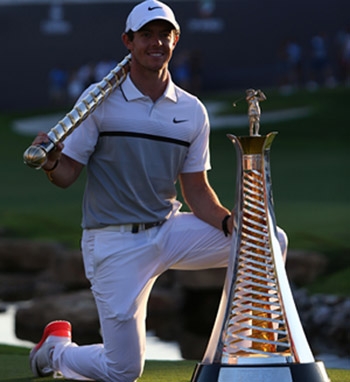 Rory McIlroy of Northern Ireland poses with his trophy after winning the DP World Tour Golf Championship in Dubai, on November 22, 2015. The $8 million DP World Tour Championship features the top-60 players in the Race to Dubai. AFP PHOTO / MARWAN NAAMANI |

Dubai : Leading Indian golfer Anirban Lahiri signed off with a one-under 71 to finish tied 34th after the fourth and final round, while Northern Irishman Rory McIlroy (66) won the $8 million DP World Tour Championship to claim his third European Tour Order of Merit title here on Sunday.

This was his third victory on the European Tour of the 2015 season — other two came at the Omega Dubai Desert Classic and the WGC-Cadillac Match Play. It was also his second DP World Tour Championship title in Dubai — the first came in 2012. The 26-year-old five-time Major champion got 1,333,330 Euros ($1419796.45) for his win that also secured his top spot in the European Order of Merit. He also won the European Tour Order of Merit title in 2012 and 2014. “It means an awful lot, I had to play so well over the weekend. Dubai has been a pretty sweet place for me,” McIlroy told europeantour.com. Englishman Danny Willett finished second in the Order of Merit. South African Branden Grace scored 67 to finish third with a total of 15-under 273 (68-69-69-67).