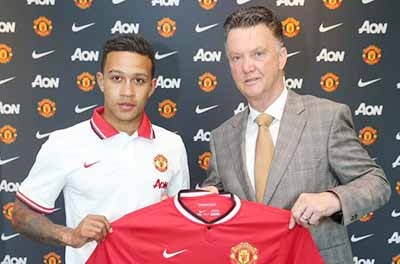 United announced last month they had reached a deal to sign the 21-year-old Netherlands international for a fee reported to be around 30 million euros ($33.67 million).

Depay, who has spent his entire career with PSV, making 124 senior appearances, finished as the Dutch league’s top scorer last season with 22 goals in 30 games as Phillip Cocu’s side wrapped up their first title in seven seasons.

“This is a dream come true for me; to play for the biggest club in the world and also to have the chance to work with someone who I believe is the best manager in the world, Louis van Gaal. I have great belief in my ability and I work hard to strive to achieve my dreams.”

Depay, who can play on the left of a front three or as a central striker, scored two goals at last year’s World Cup as the Netherlands finished third under the guidance of United manager Louis van Gaal. —AFP