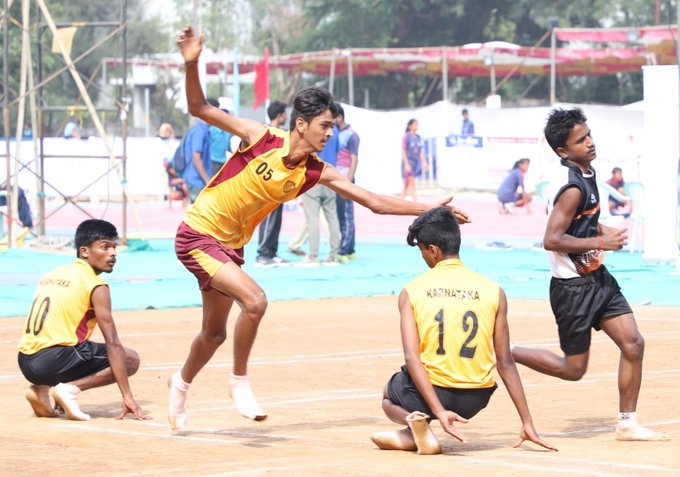 While torrential rain a day before lead to the playing field being submerged under water, the venue needed to be shifted last minute to the Sarsana Convention Indoor Centre for the matches to be resumed late in the afternoon.

Defending Champions, Maharashtra were the first team to take the matt and defeated Delhi by 2 points to assure the medals for the team. The match which saw some head to head fights from both the teams was won by the girls’ team of Maharashtra with almost 2 minutes to spare on the clock. The girls putting up a fine display of tactical approach using continues khos challenged the Delhi defenders at the pole and secured the crucial wickets using smart pole dives.

Reshma Rathod was the star for Maharashtra as she took 3 out of 5 wickets for Maharashtra and also put up a fine run to tire off the players from the Capital in both the innings. Delhi fought hard but fell short of 1 point in each innings to bid adieu in the semis.

The boys’ too put up a scintillating show as they defeated Karnataka by 3 points and an innings to spare.

Gujarat girls however had a rough day on the field as despite coming very close to the winning lines the girls lost to Karnataka by a point in the last four. The Karnataka girls wrapped the game with effective ring game and boundary line dives in just about 21 minutes.

In the other semi final match, the Kohlapur boys backed with strong all round show won their match against Andhra Pradesh by 4 points in a close encounter.

Owing to a complete washout on the fourth day and all rounds of the knockout being shifted to the last day, the technical team in consultation with the jury of appeal took a decision to reduce the match to 28 minutes compared to 36 minutes with each turn being played for 7 minutes compared the standard 9 minutes.