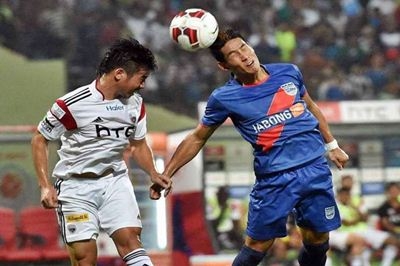 Guwahati: Chennaiyin FC will look to bag all three points as they meet a struggling NorthEast United FC in an Indian Super League (ISL) encounter at the Indira Gandhi Stadium here on Tuesday.

NorthEast has been lacklustre this season with nothing going right for them. Coach Cesar Farias has thrown in every possible card he can but the team seems to crumble whenever the defence is put under pressure. And with the likes of Elano Blumer in the rival squad, the franchise would keep their fingers crossed and pray. The team from the eastern part of the country has lost all its three outings so far, losing 1-3 to Kerala Blasters and FC Goa and 0-1 to FC Pune City.

On the other hand, Chennaiyin, after losing their first two encounters to Atletico de Kolkata (2-3) and Delhi Dynamos (0-1), have made a strong comeback and have beaten top sides like Goa (4-0) and Mumbai City FC (2-0). This encounter will provide them the opportunity to get to nine points and be in the top three of the eight team standings. But with crowd support in favour of NorthEast, the tie won’t be a cakewalk. Marco Materazzi and his men will know how the vociferous supporters can spur the local players and they would have by now made plans to keep the NorthEast attackers at bay. But the likes of Sanju Pradhan, Argentine striker Nicolas Velez and Ghanaian forward Francis Dadzie will surely keep the Chennaiyin defenders busy.

At the other end too, Stiven Mendoza, who has so far scored five goals in the league, will be constantly looking for opportunities to have a run at the NorthEast defence and assisting him will be Elano and another Brazilian recruit Bruno Pelissari. However, in head-to-heads NorthEast have beaten the visitors once (3-0) and the other one was a 2-2 draw. The tie promises goals and will be an interesting watch as the hosts have nowhere to go but fight back.