Rohit Sharma survived a scare after he was dropped against Bangladesh leaving bowler Taskin Ahmed livid during their Group 2 match of Super 12s in the T20 World Cup at the Adelaide Oval on Wednesday.

The incident occurred in the third over of the match when Taskin induced Rohit into pulling one. But the India captain failed to time it and found Hasan Mahmud at deep backward.

However Mahmud fluffed an easy chance. A fuming Taskin unleashed obscenities at the fellow pacer.

A win for India over Bangladesh in a chilly, cold Adelaide will strengthen their quest to seal a semifinal spot. India and Bangladesh are level on four points in the Group 2 points table, with the former ahead on net run rate.

Overall, India have a 10-1 record against Bangladesh in T20Is. The last meeting between the two teams in T20 World Cups resulted in a heart-stopping one-run win for India in Bengaluru in 2016.

After winning the toss, Shakib said they have brought in an extra pacer in Shoriful Islam, who replaces Soumya Sarkar in the playing eleven.

"Don't know what the best score is on this pitch. Know what's coming at us, we're well prepared. Boys gelling well together, everyone looking forward to this. Need to continue doing good things. Batting is one area we can improve. Our fast bowling is terrific," he expressed.

"Runs on the board would matter. We would look to bat well. All games are important in this format. We didn't play well in the last game. Hopefully, we can play some good cricket and get those two points. Good ground and good atmosphere here. Good weather as well," he stated.

Read Also
'Seen something like that for first time': Bangladesh's Taskin Ahmed on no-ball drama against... 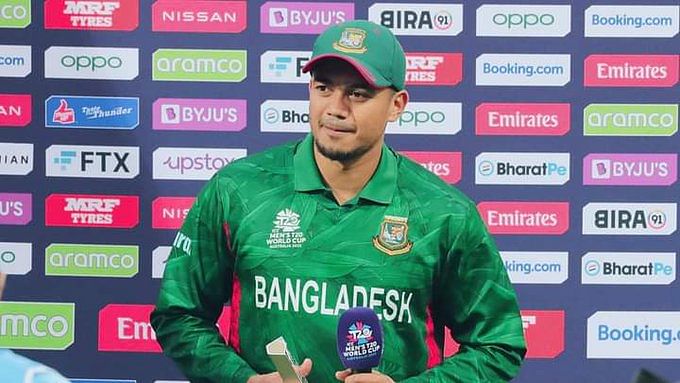