HomeSports'Seen something like that for first time': Bangladesh's Taskin Ahmed on no-ball drama against Zimbabwe

'Seen something like that for first time': Bangladesh's Taskin Ahmed on no-ball drama against Zimbabwe

With this thrilling win, Bangladesh have kept alive their chances of reaching the semi-finals at the ICC Men's T20 World Cup

Brisbane: The Craig Ervine-led Zimbabwe came close to beating Bangladesh before eventually losing the match by 3 runs in the Super12s of the ongoing ICC T20 World Cup 2022 here at The Gabba on Sunday.

The star bowler of Bangladesh Taskin Ahmed said that he had never seen something like this last over no ball before and added that he will focus on improving and giving his best for his team in the ongoing T20 World Cup.

With this thrilling win, Bangladesh have kept alive their chances of reaching the semi-finals at the ICC Men's T20 World Cup with a thrilling three-run victory over Zimbabwe in Brisbane on Sunday.

The way the game's final over played out had cricket fans around the world crossing their fingers. At first, it appeared that Bangladesh had won by four runs, but Zimbabwe's batters were called back to the field after the umpire called a no-ball under unusual circumstances.

"We were nervous in the middle after that last ball (no-ball). I've seen something like that for the first time. Just focusing on improving and giving my best. Back home we play on slow wickets, and here we get early movement and help off the track as well," said Taskin Ahmed in a post-match presentation.

Bowlers handed Bangladesh a win they probably just earned following a superb new-ball spell from Taskin Ahmed (3/19) and an equally amazing haul of 2-15 from Mustafizur Rahman.

"Got a good bunch of fast bowling groups, we support each other and work hard to improve ourselves. We get great support from our bowling coach (Allan Donald) and all the other support staff. We got a good group and hopefully improved more," the fast bowler added.

The match between Bangladesh and Zimbabwe all came down to the final delivery with Blessing Muzarabani on strike and needing four runs off Mosaddek Hossain's bowling.

Hossain appeared to be the hero of the match after taking successive wickets in the two balls, but the Bangladesh wicketkeeper Nurul Hasan was discovered to have taken the ball in front of the stumps. The players were brought back to the field to replay the final delivery.

Hossain repeated the dose a second time around as Muzarabani failed to connect the bat with the ball and handed Bangladesh a three-run victory. 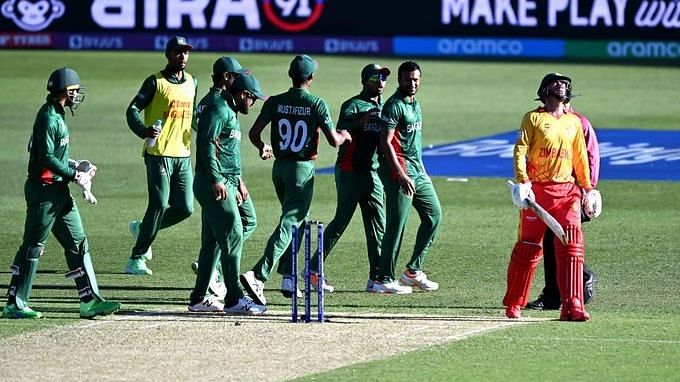