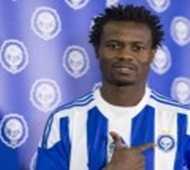 New Delhi: Delhi Dynamos FC today announced the Loan Transfer of their joint top-scorer at the 2015 Hero Indian Super League, Richard Gadze to the Finnish Giants HJK Helinski on a one year deal. HJK Helinski is a top division club from the capital city of Finland, playing in the Finnish League Veikkausliiga. The club has spent most of its history in the top tier of Finnish football. HJK is the only Finnish club that has participated in the UEFA Champions’ League group stage.

The young Ghanaian U-23 national, Richard now holds the joint top position of scoring four goals during the 2015 season of the HISL. Delhi Dynamos FC President Prashant Agarwal said: “It’s a proud moment for an Indian Club that’s been in existence for only two seasons of the HISL to have their player Richard Gadze go out on loan to HJK Helsinki, which is a top tier club from Finland.

“This is a first for an Indian club, to loan out a player to a club in Europe playing in the Europa League amongst other greats from the Bundesliga, La Liga, Ligue 1, English Premier League and the Serie A.

“We at Delhi Dynamos F.C. believe in the philosophy of building stars, where not only Legends and Marquees are associated with us but we have now set a new benchmark by creating a bridge where future stars created in India are sent to Europe rather than the other way around.”

This is the second successful loan transfer for a Delhi Dynamos FC player post a competitive 2015 HISL Season. In late January 2016, Delhi Dynamos FC’s French midfielder Florent Malouda signed with the Egyptian Premier League side Wadi Degla
SC, and has been having a good season away.

Delhi Dynamos FC became the first Indian club early in 2015 to have Adil Nabi, come on loan from West Bromwich Albion FC playing in the English Premier League. Amongst other transfers, Hansito Mulder, the ex-Delhi Dynamos midfielder, moved to the Spanish club Cacereno, while the super saver Goal Keeper Toni Doblas moved to another Spanish club CD Toledo earlier this month. The Dynamos marquee defender John Arne Riise completed a full circle in his career by returning to the club where it all started for him, Aalesunds FK in Norway.