Champion from the war-ravaged Syria; Hend Zaza is the youngest competitor at the Tokyo Games, since the 1968 Winter Olympics 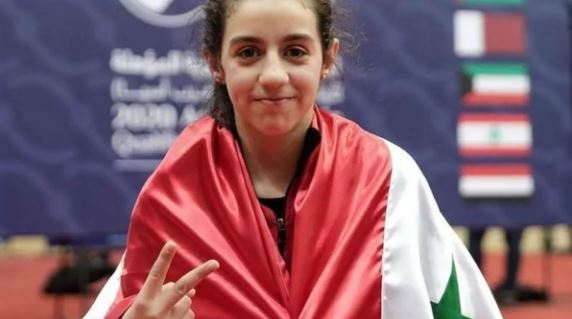 Tokyo: Not even a devastating war that destroyed her home city could stop Syria's 12-year-old table tennis player Hend Zaza from pursuing and realising her Olympic dream.

Gearing up to represent her war-ravaged country as the youngest Olympian at the Tokyo Games, Zaza hopes she can bring some smile back on the lips of his breathens back home.

"I want to make the Syrian people happy, not just me, but all sports we have. We will tell them that we are up for this and that we love them so much," said Zaza who hails from the Syrian city of Hama.

Zaza says it was table tennis which provided her an escape from all the suffering and pain of war and also gave her the strength to face the challenges of life.

"Table tennis gave me everything and taught me to be a strong human being, a confident one. It gave me patience," said Zaza, who was Syria's flagbearer in the opening ceremony on Friday.

Zaza, who started playing in 2014 and now trains in Damascus, will be 12 years and 204 days old when she opens her women's singles campaign on Saturday against 39-year-old Liu Jia of Austria, an opponent more than three times her age.

"We are challenging all conditions. We are able to control this. Once we go and play, we forget everything and only think about playing.

"We are training so that we can challenge the whole world and we are up to the challenge."

Zaza could have made her Olympic debut at 11 had the COVID-19 pandemic not delayed the Games by a year.

She will now be the youngest Olympian since 1992, when 11-year-old Carlos Front of Spain competed in rowing and 12-year-old Judit Kiss of Hungary in the swimming pool.

Zaza, however, says the postponement actually helped her to work on her skills.

"Because of the delay, I trained more and participated in training camps, benefited more. My performance improved."

Only the second Syrian table tennis player to compete at the Olympic Games after Heba Allejji, Zaza says she harboured this dream for the last five years.

Allejji had claimed her spot at Rio Olympics through the tripartite system.

This time around, Zaza earned her right to be at the Games by winning the Western Asia Olympic Qualification Tournament in Jordan in February last year.

"Since 2016, I had the dream of qualifying for the Tokyo Olympics and I trained hard."

Zaza idolises double Rio Olympics gold medallist Ding Ning of China but her journey has been a tough one as her training was often interrupted by power outages or lack of equipment or quality training partners.

But she is unfazed and remains determined to pursue her dreams.

"Now, I'm starting the first step in the Olympics," she says.

"I will not stop playing. Table tennis is my whole life. I spend all my time playing it, other than table tennis I study.

"I'm working towards the future, to be the world champion and an Olympic champion, and to be a pharmacist or lawyer with my studies. The day that I don't train, I feel that I'm missing something and the day is not good."