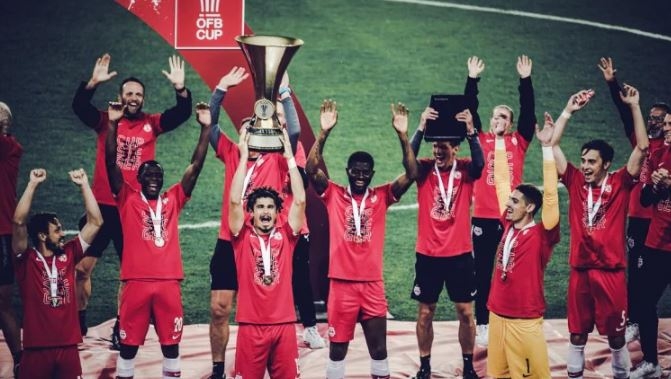 Red Bull Salzburg boss Jesse Marsch made history on Friday, becoming the first born-and-bred American coach to win a major European trophy when his side won the Austrian Cup.

Salzburg cruised to a 5-0 victory over Austria Lustenau in the OFB-Cup final, giving Salzburg their second consecutive Austrian Cup win.

Marsch, who is in his debut season with Salzburg, is not the first American-born manager to win a European trophy as John Caulfield, who was mostly raised in Ireland, has managed Cork City to silverware in the past.

The match on Friday also marked the return of Austrian football, which has been on hiatus since March due to the coronavirus pandemic. Matches in the Austrian Bundesliga are set to kick off this weekend, with Salzburg holding a three-point advantage over LASK Linz with 10 games remaining.

Marsch's side received a major boost in their title pursuit on Thursday, as LASK were docked 12 points for breaching social distancing rules in training.

LASK have filed a protest, saying in a statement that they had been victims of "industrial espionage".

"We consider the sanctions expressed in the judgment to be a deduction of 12 points before the division of points and the €75,000 penalty payment is disproportionate," the club said.

"We have therefore exercised our right and immediately protested the excessive judgment."

For Marsch, his debut season could now include two major trophies as well as a respectable showing the Champions League, where his side finished third in a group that contained Liverpool, Napoli and Genk.

That result saw Salzburg drop into the Europa League, where they were eliminated by Eintracht Frankfurt at the last-32 phase.

Salzburg have also seen two of their top players sold to European powers this term, with Erling Haaland joining Borussia Dortmund and Takumi Minamino making the move to Liverpool.

Marsch, a former U.S. men's national team assistant, spent three-and-a-half seasons managing the New York Red Bulls in Major League Soccer. He moved to sister club RB Leipzig prior to the 2018-19 campaign, where he served as an assistant to ​Ralf Rangnick​ before moving to Austria to take over Salzburg.