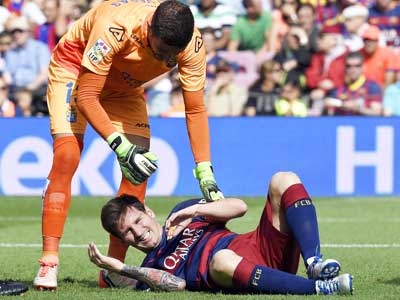 Messi suffered a torn left knee ligament as Barca squeezed past Las Palmas 2-1 at the weekend.

Luis Suarez carried the mantle after Messi’s departure with a double to ensure the Catalans got back to winning ways after being hammered 4-1 by Celta Vigo in their previous outing.

And much more will be needed of Suarez and Neymar in the coming weeks as Barca’s stretched and injury-ridden squad faces up to eight games without Messi. “He is the best in the world and logically we will miss him a lot,” said midfielder Sergio Busquets.

With Claudio Bravo, Thomas Vermaelen and Rafinha also sidelined by injury, coach Luis Enrique has just 15 senior outfield players to choose from in the coming weeks. “We are having a lot of bad luck with injuries, even more so when we can’t register players.”

Barca are serving a one-year ban from registering new players for breaking FIFA’s rules on the signing of minors.

And the club’s appeal to world football’s governing body to register one of their two summer signings, Arda Turan and Aleix Vidal, due to the injury crisis has fallen on deaf ears.

“It is an extra test and motivation for our team,” said Enrique. “In these moments is when you see what we are made of and I have no doubt that we are going to be fine.”

Leverkusen have particularly bad memories of being faced with Messi’s magic as he scored five in a 7-1 humiliation the last time the Germans visited Barcelona in the last-16 back in 2012.

However, the club’s sporting director Rudi Voeller claimed he wasn’t pleased to hear Messi will be out of action.