Samantha had earlier deleted nearly all her pictures with Naga Chaitanya from her social media handles.

In October 2021, actors Samantha Ruth Prabhu and Naga Chaitanya announced their separation. They took to their respective social media handles to issue a statement.

Now, months after confirming their split after four years of marriage, Samantha admitted that she would advise her younger self to never get a tattoo.

During an Ask Me Anything session on Instagram, a netizen asked “Some tattoo ideas you’d love to try some day,", to which Sam replied, “You know the one thing I’d tell my younger self is never ever get a tattoo. Never. Never ever. Ever, get a tattoo."

For those unversed, Samantha has three tattoos that are connected to ex-husband Naga Chaitanya.

'The Family Man' actress has YMC — an abbreviation of her Telugu debut film ‘Yeh Maaya Chesave’ on the nape of her neck. It also featured Naga, which marked their first rendezvous.

She also has "Chay" inked on her rib, and a matching Viking symbol tattoo which means, “create your own reality."

Samantha had earlier deleted nearly all her pictures with Naga Chaitanya from her social media handles. She had deleted pictures from their Spain vacation, Amsterdam trip, and most pictures from Rana Daggubati's wedding, Christmas celebrations, among others. Even her anniversary posts for Naga have been deleted from social media.

Announcing their separation, Samantha and Chay had shared in a statement, "To all our well-wishers, after much deliberation and thought, Chay and I have decided to part ways as husband and wife to pursue our own paths. We are fortunate to have a friendship of over a decade that was the very core of our relationship which we believe will always hold a special bond between us. We request our fans, well-wishers and the media to support us during this difficult time and give us the privacy we need to move on. Thanking you for your support." 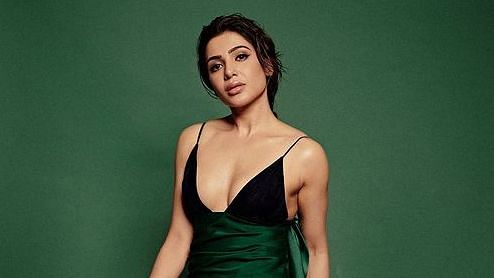 'Can we stop judging women based on hemlines and necklines?': Samantha Ruth Prabhu slams trolls with...