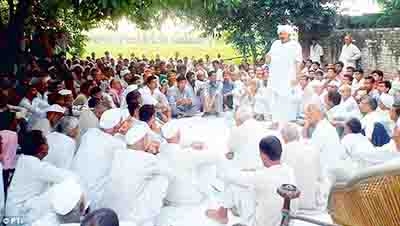 A representational picture of Panchayat |

The Maharashtra government, on Friday, told the Bombay High Court that it won't be appointing a private person as administrators to the thousands of Gram Panchayats, terms of which have expired. The state further told the HC that it would, meanwhile, appoint public servants for the post.

The state, through advocate general Ashutosh Kumbhakoni, assured the bench of Justices Sambhaji Shinde and Makarand Karnik that it won't be making any private person an administrator to the gram panchayats. He further told the judges that only public servants would be appointed as administrators; at least, till these petitions are decided.

The judges were dealing with a clutch of petitions challenging the government resolutions (GRs) issued in July, by which a private person residing in the village with his or her name featuring in the voters' list could be appointed as administrator of the local Gram Panchayat (village self-government body) whose term has come to an end.

The state by virtue of these GRs had proposed to appoint administrators as fresh elections could not be held due to the pandemic.

In an affidavit, the state, through AG Kumbhakoni, said that only government officers of the rank of Extension Officer from Agriculture, Health, Education and Panchayat departments shall be considered for the post.

Having heard the contention, the judges accepted AG's statement on record and further suggested the state to consider appointing Gram Sevaks as administrators.

"They (gram sevaks) normally work in close tandem with the Sarpanch and, hence, are aware of all the work and procedure of the Panchayat. They would be a better option than appointing a private person as administrator," Justice Shinde suggested.

The judges, accordingly, adjourned the matter for further hearing till August 24.