According to the regional disaster management cell of Thane Municipal Corporation, the first accident took place in the wee hours of Friday at 2:35 am

Thane: Two trucks topple down on Ghodbunder road on Friday leading to slow-moving traffic till the operation was completed. While one truck was full with an apple box, the other was full of cashew nuts. Both the trucks were removed and put aside with the help of traffic police, disaster management cell, fire brigade, and locals. Traffic police claim the traffic was not much affected as the roads were free for vehicles.

According to the regional disaster management cell of Thane Municipal Corporation, the first accident took place in the wee hours of Friday at 2:35 am. The Tata truck RJ 19 GE 0062 loaded with apples was traveling from Kashmir to APMC market using the Ghodbunder road loaded with 17 tonnes of apples.

"It toppled due to some reason or unbalancing, it was fully loaded with 17 tonnes of apples. Each box in it was around 15 kilograms. Firstly we decided to remove the apple box to put aside the truck. We then arranged locals from the nearby area. At around 5 am all the boxes were removed and put aside," he added.

Pardesi further said, "After the boxes were removed, the truck was free, we put aside the truck with the help of hydra. It was early morning hours and it did not affect much traffic. The truck toppled just before the Manpada flyover. However, the flyover was free for traffic. By around 8:30 am the complete operation was completed," added Pardesi.

Sources from the Regional Disaster Management Cell of Thane Municipal corporation said after the truck was put aside we found oil spilled on the road. "To avoid any accident or mischief, we put mud on the oil. However, till the city vehicles started for the day the road was easy with moving vehicles," said the official.

According to the RDMC, the second accident took place at 2 pm, when a truck MH 48 AG 5733 traveling from Vasai to Vashi Market toppled down on the Ghodbunder road towards Thane. The truck was owned by Vijay Kumar Yadav and was driven by Pradeep Kumar.

“The truck was full with 8 tonnes of cashew nuts and the accident took place near Gaimukh Octroi Naka, opposite TMC school no. 97, Gaimukh, Thane. We first removed the cashew nut box from the truck and later it was removed to one side of the road with the help of Hydra. The Ghodbunder road is cleared now for all vehicles,” said an official from the RDMC. 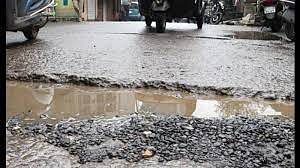