The complaint was filed on Thursday, November 17, in Thane Nagar police station stating that Gandhi hurt public's sentiments with his remarks. A non-cognizable offense was registered under Sections 500 [defamation] & 501 [printing or engraving defamaory matter] of the Indian Penal Code.

Rahul Gandhi, during a press conference in Maharashtra's Akola on Thursday, had alleged that Savarkar betrayed leaders like MK Gandhi, Jawaharlal Nehru and Sardar Patel by signing a letter of apology to the British before independence.

Filing a complaint against Gandhi for his remarks, the Shinde camp leader, who is also the party's Mahila Aghadi head, said that she will not tolerate the "defamation of our great men".

"Rahul Gandhi during the Bharat Jodo Yatra made a statement defaming the freedom fighter Savarkar and due to this the sentiments of the local citizens have been hurt. We will not tolerate the defamation of our great men in the soil of Maharashtra," she said.

Balasaheb's Shiv Sena party also took out a protest march on Thursday in Thane to protest against Rahul Gandhi's remarks.

The spokesperson of Balasaheb's Shiv Sena party and Maharashtra state coordinator Naresh Mhaske also demanded during the march yesterday that the police should file a case against Rahul Gandhi for his statement and arrest him. After that, the case was registered in the evening. 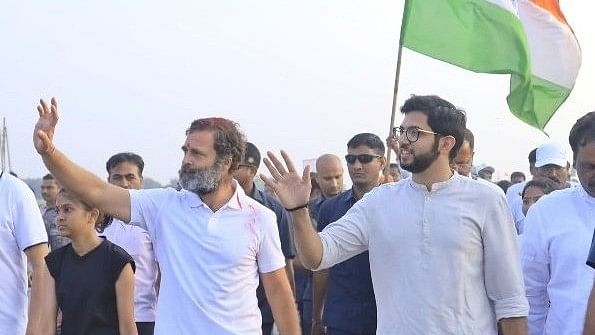 What did Rahul Gandhi say about Savarkar?

Gandhi scion had said at a function in memory of tribal leader Birsa Munda in Washim, “Despite the British offering him land, [Birsa Munda] refused to bow down; he chose death. We, the Congress party, consider him our idol. For the BJP and RSS, Savarkar ji, who wrote mercy petitions to the British and accepted pension, is an idol.”

Gandhi on Thursday reiterated his stance and criticism of Hindutva ideologue Savarkar over mercy petitions to the British during the freedom struggle. Gandhi also produced a copy os his letter and read it out, ‘’Savarkar ji wrote in the letter 'I beg to remain, sir, your most obedient servant.'

Gandhi said ‘’When he signed this letter, what was the reason? It was fear. He was afraid of the British."

‘’This is my opinion about Savarkar ji signing this letter," he said citing that Mahatma Gandhi, Jawaharlal Nehru and Vallabhbhai Patel spent years in jail, "yet they never signed such a letter".