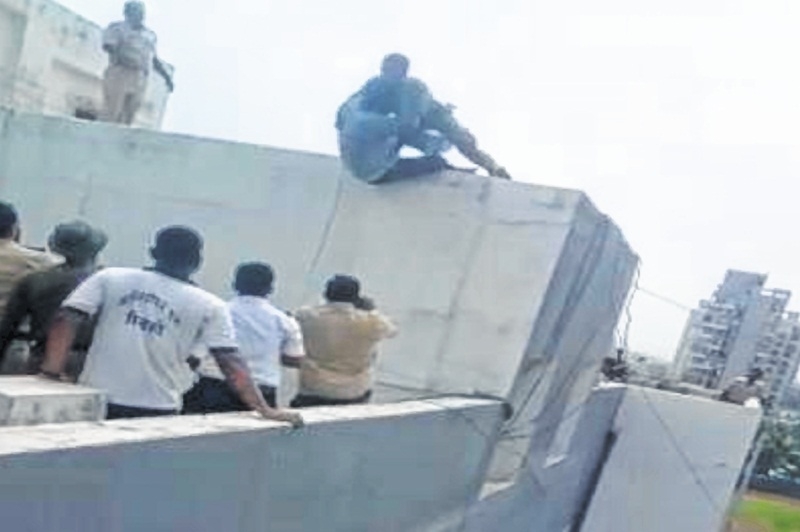 Mumbai: A police commando, Swapnil Mahadik, attached to the state’s Quick Response Team (QRT), sustained a serious head injury and is critical after he helped foil a 30-year-old man’s attempt to commit suicide. The man, Yogesh Chandne, was seen sitting on the water tank atop of Navi Mumbai Police Commissioner’s office at Kalamboli on Saturday morning. Chandne, a Beed native, is reportedly suffering from depression, and had threatened to jump off the terrace. According to sources, a police officer saw Chandne sitting on the water tank of the three-storey Navi Mumbai CP office and fearing he would jump from the terrace, a police team and QRT members rushed to rescue him and tried to talk Chandne out of committing suicide.

Chandne, however, refused to come down and asked the policemen to leave. While policemen kept talking to Chandne, keeping him busy, the police commando Mahadik acted swiftly and ambushed Chandne, leaping onto him from the rear. Mahadik was successful in rescuing Chandne, but Mahadik fell from the wall and his head landed on the floor.

Chadne was brought down from the tank and was taken in custody, said an officer. Mahadik sustained head injuries in the rescue operation and was rushed to Apollo Hospital, Nerul. The police source said Mahadik is critical, as he landed straight on his head after his heroic jump from the water tanker on the terrace. Meanwhile, police are trying to ascertain the reason for Chandne trying to commit suicide. He is being counselled by Apollo doctors.