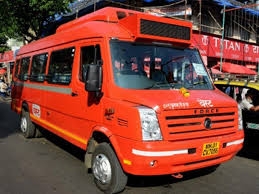 Schools in the city have resumed, but still there are no signs of buses hitting the road.

In a meeting held between the bus owners and schools on Tuesday, none of the parties agreed that buses would resume normalcy. The schools informed that as only a portion of students are physically attending, they have not hired bus services.

Currently, there are 12,000 school buses that are part of the 40,000 private buses in the city. “School bus owners had a meeting with 300 schools, their principals and management. Even after a two-hours meeting, no resolution was achieved,” said President of School Bus Owners Association, Anil Garg.

The owners are now requesting the school bus manufacturers to come forward to save the industry as the government are not doing much for them.

The government had laid down specific guidelines for students from standard 8-12 attending schools and junior colleges.

The bus owners association, though, claimed that some points like allowing only 50 per cent capacity aren’t financially viable for them. They also want taxes on buses to be waived entirely till 2022, extending the life of vehicles by two years.

“We have been demanding a hike in fees by 30 per cent. However, the schools informed us that many children are attending, so we are hiring bus services until next year.

Moreover, the schools themselves are stating that not all parents are paying school fees. So the question of paying school bus fees is tough,” said another member of the association.

“In our school, PTA manages the bus service. Currently, school buses aren’t plying, but we plan to start our own services from January onwards. The situation might improve when more students start attending schools. Currently, the PTA has shared google forms with parents to get an idea of how many parents are willing to opt for bus services; only than a decision will be taken. School bus operators have faced huge losses during the lockdown and face it even after other things reopened. They would want to hike school buses restart,” said Principal of Bombay Scottish, Mahim, Sunita George.

“Plying buses in the current situation is not at all feasible. Currently, schools aren’t running at full strength. In Ashok Nagar branch, only 40 per cent take bus service. Considering that only class VIII to X is allowed for physical school, they account for 20 per cent of the total number of students. Not all students between Class VIII and X have opted for physical classes; many still attend online. Besides, they will need to hike fees; they cannot ply as in at pre covid times,” said CEO of Children Academy Group of schools, Rohit Bhatt.