HomeMumbaiMumbai updates: Three dead, one injured after part of slab of building collapses in Ulhasnagar

Mumbai updates: Three dead, one injured after part of slab of building collapses in Ulhasnagar

Due to technical problem in signal initiation at Dadar Station. Trains are running late on Main line. Staff /officials are attending it and will be resolved soon. Some of the passengers were seen walking on the tracks as a result of the delay.

Staff /officials are attending it and will be resolved soon. For information.@drmmumbaicr 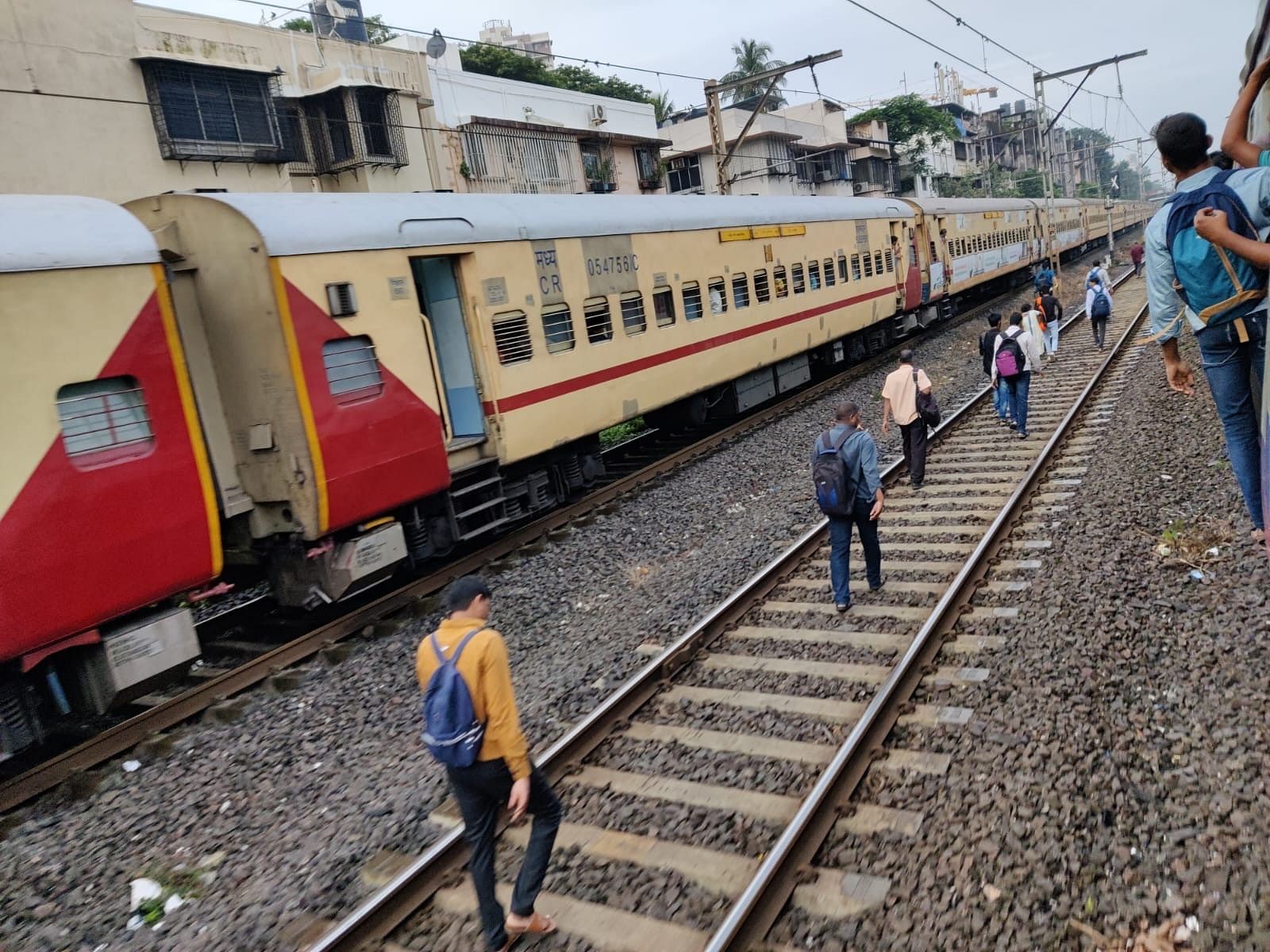 Some of the passengers were seen walking on the tracks near Matunga station as a result of the delay. |

The city on Wednesday witnessed a slight temperature drop as the winter season slowly sets in. According to India Meteorological Department (IMD), several parts of Maharashtra, including Mumbai, have been witnessing a drop in temperature due to present weather conditions.

IMD official KS Hosalikar said the drop in temperature has been bringing chill air during the daytime and the nights are getting colder as well.

The weather for Mumbai on Wednesday remained cloudy with light showers and less sunshine. The minimum temperature, which has been on an average of 25 degrees Celsius, since last month has also seen a drop of 2 degrees Celsius in the past two days.

Seven people were seriously injured on Wednesday after a car rammed into them, while also hitting auto-rickshaws, a bike and a tempo in the Garodia Nagar area of Ghatkopar. According to the Pant Nagar police who are handling the case, the incident occurred at 1.37 pm.

“An auto-rickshaw driver entered his friend's car to charge his mobile phone, but since the engine was off, it was not possible for him to charge the device. He turned on the engine and accidentally pressed the accelerator which led to the accident,” said a police official.

The police have detained Raju Ramvilas Yadav, 42, and have registered a case against him for negligence. The driver of the car will also be questioned, confirmed the police. The seven injured have been identified as Rajendra Prasad, 49, Sapna Sangare, 35, Aditya Sangare, 9, Vaishnavi Kale, 16, Jayram Yadav, 46, Shraddha Sushvirkar, 17, and Bharatbhai Shah 65.

The city's taxi and auto unions have once again threatened to go on an indefinite strike, starting from September 26, reasoning that state industry minister Uday Samant has “failed” to keep his promise of fare revision.

Citing constant rise in CNG prices, the unions had announced a strike from September 15. On September 13, Samant met with the unions and coaxed them not to resort to protest as their demand would be considered within ten days.

The technical glitch in signalling near Dadar was fixed by 8 am today. The trains main line down started running routinely immediately while services on Down fast line were restored by 8.20 am.

The problem of signal initiation at Dadar Station attended and resolved.

But, trains on main line are running late due to bunching.
For information.

Commuters of Central Railway(CR)will be able to get 300 ml purified water at Rs 2 and five litres for Rs 25 through the water vending machines being installed at different stations in Mumbai division.

Installation of four water vending machines at Kalyan has already been completed and the work of around a dozens of other machines at different stations is in progress, which will be completed within a month.

A passenger can buy a minimum of 300 ml and maximum of five litres of water, purified through reverse osmosis process at the water vending machines. The prices will be less if they take water in their own containers.

Due to bus breakdown, southbound vehicular movement is slow at BKC Conector.

Bombay HC scheduled to hear plea of Shiv Sena's Thackeray faction today after BMC refused to give permission for holding a Dussehra rally at Shivaji Park to both Shiv Sena factions, based on local police's report citing the rally might create a law & order situation in the area.

Bombay HC scheduled to hear plea of Shiv Sena's Thackeray faction today after BMC refused to give permission for holding a Dussehra rally at Shivaji Park to both Shiv Sena factions, based on local police's report citing the rally might create a law & order situation in the area. pic.twitter.com/tM0eJ4kJdq

Maharashtra ATS has arrested 20 people linked to PFI across the state. https://t.co/8hc4phkbdc pic.twitter.com/pct3dXjmnV

It's around last 40 min we are waiting to come #DADAR station.. it's take more than 40 min Kurla to Dadar @Central_Railway please at least on every Sunday megablock which types of work you done ... Fail to provide services @RailMinIndia

Mumbai
-Local trains on central line in the fast lane from Kalyan to CST were halted after a signal issue near Dadar.the issue has been resolved now.trains are running late causing passenger inconvenience

-The problem of signal initiation at Dadar Station attended and resolved pic.twitter.com/GdXMYfvJH2

How were Mumbai Municipal Schools before? At first it was looked down upon. But today there is a queue to get admission outside the same schools. This is Shiv Sena's work: Shiv Sena chief Uddhav Thackeray

#EknathShinde faction has claimed that #UddhavThackeray had suppressed facts regarding pending dispute over who is the real #ShivSena. It prays #BombayHighCourt not to hear the plea till #ElectionCommission decides on the issue.

After Vedanta-Foxconn, PhonePe to exit from Maharashtra, will move to Bengaluru

After Vedanta-Foxconn semiconductor project was lost to Gujarat, PhonePe has decided to exit from Maharashtra. In a public notice in the paper from the Maharashtra government it has notified that the PhonePe office in Mumbai will be shifted to Karnataka.

This move of PhonePe will stir up controversy in Maharashtra because after Vedanta decided to move out of Maharashtra, the state ended up losing a lot of job opportunities and that gave rise to political mudslinging in the state between the parties.

Read Also
After Vedanta-Foxconn, PhonePe to exit from Maharashtra, will move to Bengaluru

Bombay High Court will hear Uddhav Thackeray plea for rally at Shivaji Park on Friday after it sought permission to amend the petition.

#BombayHighCourt will hear #UddhavThackeray plea for rally at #ShivajiPark on Friday after it sought permission to amend the petition. #BMC today rejected applications by both the faction for rally at Shivaji Park. @fpjindia

In 2019 polls, you (Uddhav Thackeray) came (to power) by showing PM Modi's photo; backstabbed BJP & went with Congress & NCP. You, along with Congress, NCP, tried your best to finish me, you could not finish me then and won't be able to do it later: Maharashtra Dy CM D Fadnavis

In 2019 polls, you (Uddhav Thackeray) came (to power) by showing PM Modi's photo; backstabbed BJP & went with Congress & NCP. You, along with Congress, NCP, tried your best to finish me, you could not finish me then and won't be able to do it later: Maharashtra Dy CM D Fadnavis pic.twitter.com/FqxXDUm1z5

In an unfortunate incident on Wednesday, September 21 a 22-year-old army aspirant who had come to Thane district in Maharashtra for an interview under the government's 'Agnipath' scheme was killed after he was run over by a train.

The incident took place at around 11 am at Mumbra railway station informed a railway police officer from Thane on Thursday, September 22.

A police officer from Thane railway police station said, "The deceased, Rameshwar Deore hailing from Dhule district in Maharashtra had come to Mumbra where interviews are underway for the recruitment of Agniveers under the scheme. Deore was run over by a speeding train when he was crossing the track."

Police officer further added, "Deore was rushed to the Thane civil hospital where doctors declared him brought dead. We have registered a case of accidental death."

The Enforcement Directorate (ED) has attached assets worth Rs. 2747.69 crore in the ABG Shipyard Limited case. The attached assets include Shipyard at Surat and Dahej located in Gujarat, agricultural lands and plots, various commercial and residential premises in Gujarat and Maharashtra and bank accounts owned by ABG Shipyard Ltd, its group companies and other related entities.

The investigation by the ED revealed that ABG Shipyard Ltd and its Chairman and Managing Director Rishi Kamlesh Agarwal availed various credit facilities/loans from a consortium of Banks led by ICICI Bank, Mumbai on the pretext of meeting its capital requirements and other business expenses but ABG Shipyard Ltd. misappropriated the credit facilities availed from the consortium and diverted the funds for the purposes other than its actual cause in the garb of various loans/advances/investments, etc to various related entities incorporated in India and abroad, that eventually caused monetary loss to the tune of Rs 22,842 crores to the consortium.

Common sense says filling Potholes will solve traffic problems, but as they say “Common Sense is very uncommon”
A Pothole at Milind Nagar, JVLR after L&T flyover causes jams that stretch for kms every day but somehow @MMRDAOfficial refuses to fix it ?@AshwiniBhide pic.twitter.com/oLBlWX7qzL

"Mumbai collector Nidhi Chaudhari demolished Machchimaar Koli Samaj shamshan at Erangal, Madh in the name of CRZ but no action against Aslam Shaikh 49 illegal studio construction in CRZ in same area. We want action against the collector," Somaiya tweeted.

Union Finance Minister Nirmala Sitharaman on Thursday slammed the opposition parties in Maharashtra for "shedding crocodile tears" over shifting of a Vedanta-Foxconn semiconductor plant to Gujarat from the state, and accused them of creating hurdles for five big-ticket projects during their rule.

She was addressing a press conference near Pune on the sidelines of a programme.

A blame-game has started in Maharashtra following the announcement last week that the joint venture semiconductor project of Indian conglomerate Vedanta and Taiwanese electronics giant Foxconn, proposed to be set up near Pune city earlier, will come up in Gujarat.