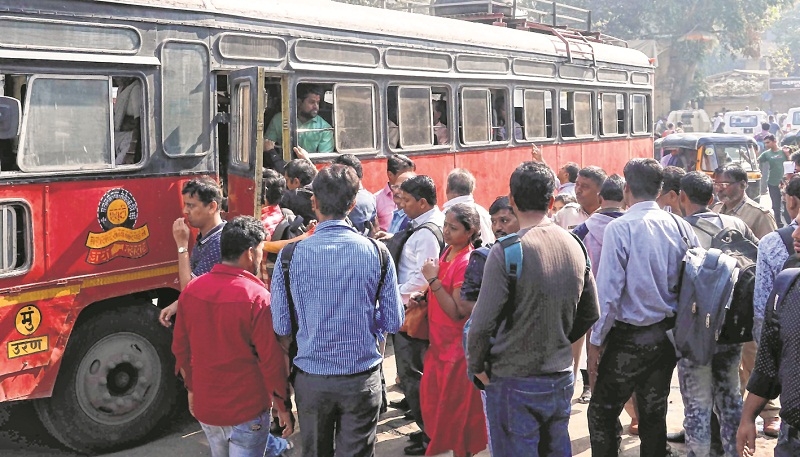 Mumbai: On day two of the ongoing strike called by a coalition of BEST unions, the political blame game continued, even as Mumbai residents continued to suffer. The Shiv Sena has blamed the BJP-led state government for inconvenience faced by passengers. The state government has issued a notice to 300 employees under the Maharashtra Essential Services Maintenance Act (MESMA) and to about 2,500 employees under the sub-notice clause.

It has also given a notice to employees residing in BEST colonies. More than 2,000 staffers will be evicted from their BEST quarters as they have not resumed duty.  The notice reads, “In spite the restraining order of the court and the notification under MESMA, you remained absent from work without intimation or prior sanction of leave on 8th January 2019. As you have participated in the illegal strike, you are in unauthorised occupation of the tenement allotted to you.

You are, therefore, called upon to vacate the aforesaid tenement and hand over the peaceful and vacant possession of the aforesaid tenement, failing which eviction proceedings will be initiated against you.” According to the notice, the urban development department of the state had issued a gazette notification on January 4 under the Maharashtra Essential Services Maintenance Act (MESMA), 2011, prohibiting the strike by BEST staffers.

The industrial court, in its order on January 7, had restrained unions and employees from going on strike from the midnight of January 7, 2019, until the decision on the main complaint. On the specific question of eviction notices to striking employees who joined the strike, Shashank Rao, general secretary of BEST Workers’ Union, said, “Shiv Sena leaders are responsible for this mess. It is unfortunate that they have reached the houses of employees. Our sisters have answered in their style.

The chairman of the standing Committee and Sena corporator Yashwant Jadhav said the House has already passed the proposal for merger of BEST and BMC budgets. “However, the state government has not done anything and has been sitting on it since a year.” A merger of BEST and BMC budgets is one of the major demands of BEST unions for the strike.“Officials and union leaders are going to meet Uddhav Thackeray on Thursday to seek a resolution to the current strike,” said Jadhav.

MSRTC addl services
Meanwhile, the Maharashtra State Road Transport Corporation (MSRTC), Central and Western railways announced they will run additional services to facilitate passengers during the strike. Late on Tuesday evening, BEST Kamgar Sena had withdrawn from the strike stating nearly 11,000 of its members will go back to work to mitigate woes of Mumbaikars. This move has drawn flak from the staffers who feel Sena is maximising on the mileage without being sympathetic to their situation.

A BEST staffer, who is a member of the Sena-affiliated union, expressed anger over his union’s decision to withdraw from the strike. “The BEST Kamgar Sena should not have withdrawn its support to the strike. Our union leaders do not seen to have any sympathy with us,” said a staffer. The Sena union’s announcement to withdraw from the protest invited sharp criticism from BEST Sahyukta Samiti chief, Shashank Rao who said the Sena has shown its ‘true character.’ Rao said, “The step taken by the Sena union will not be accepted and they will have to pay for it.”