"West Bengal and Maharashtra showed that the BJP can be defeated in the election battlefield and on the political chessboard," the Sena said.
PTI 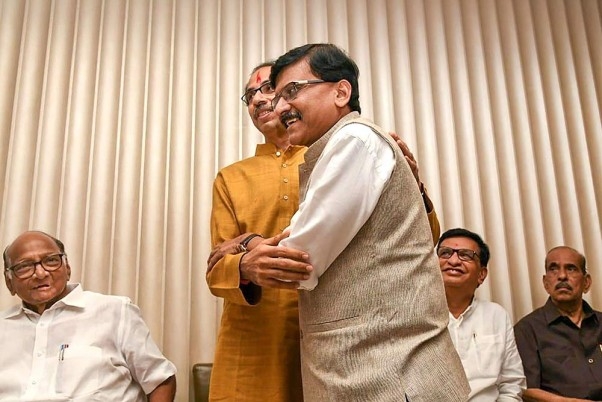 The Shiv Sena on Monday said opposition parties will have to make "shrewd and clever moves" to defeat the BJP in the 2024 Lok Sabha elections and West Bengal and Maharashtra have shown that the Modi-Shah juggernaut can be halted in the poll battlefield and on the political chessboard.

"Only thing you need is a strong will to fight," an editorial in the Sena mouthpiece 'Saamana' said, adding that a definite action plan is the need of the hour.

The Shiv Sena fell out with the BJP after the Maharashtra Assembly polls in 2019 over the issue of sharing the chief ministerial post. The Uddhav Thackeray-led party subsequently forged an alliance with the NCP and Congress to form the Maha Vikas Aghadi (MVA) government in the state.

"Two years ago, the prestige of Raj Bhavan in Maharashtra put at stake, but the BJP couldn't form government in the state," the Marathi daily said.

It was apparently referring to the hush hush early morning ceremony held last year at the Raj Bhavan where BJP leader Devendra Fadnavis was sworn in as chief minister after his party and the Shiv Sena fell out.

"West Bengal and Maharashtra showed that the BJP can be defeated in the election battlefield and on the political chessboard," the Sena said.

It mocked the recent 'Jan Ashirwad Yatras' of various Union ministers, saying if nothing is done, then these "Jan Ashirwad Jatras (fairs) will hypnotise people again".

The Union ministers during the yatras were doing nothing, but abusing the opposition parties. Most of these ministers were "outsiders in the BJP", it said, adding that "dedicated BJP workers were participating in these 'jatras' like fools".

Given this scenario, the opposition parties will have to make their moves "cleverly and shrewdly", the Sena said.

The editorial said it would be wrong to assume that the coming together of these 19 political parties will lead to weakening and exit of the Modi government.

This is because, in these 19 parties, there are many parties which now resemble "old dilapidated houses", it said.

Unless these dilapidated houses are repaired and given a new look, the other side (BJP) won't face shocks of unity, it added.

The Sena said instead of mere deliberations, a definite action plan is the need of the hour.

"The opposition's unity should not be on a weak foundation," it opined.

The Sena claimed the BJP has governments "only in Assam and Uttar Pradesh".

"The governments in Madhya Pradesh and Karnataka have been formed by toppling the democratically-elected regimes," it added.

The editorial also said that a "Jagjivan Ram" was needed in the present political arena in the national interest.