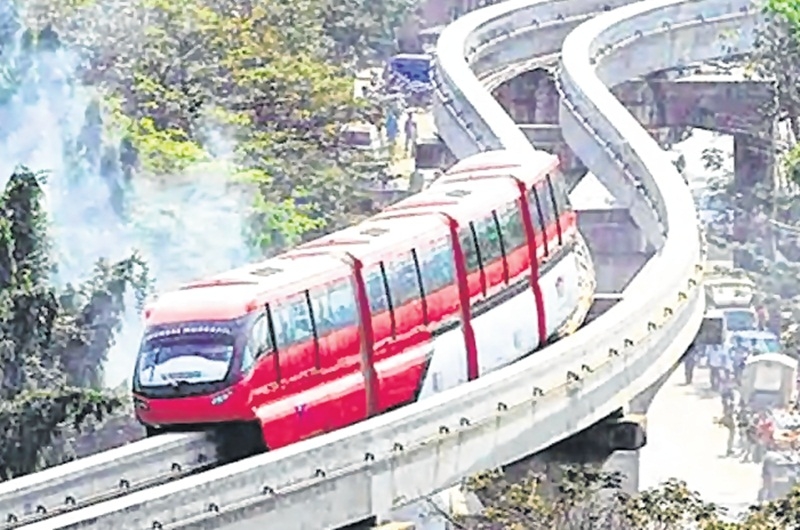 Mumbai: The entire route of Mumbai monorail running from Chembur-Wadala-Jacob Circle (Saat Rasta Mahalaxmi) was made operational for public from March 2019. With monsoon just a month away, people living in Mumbai’s worst flood prone hit areas — Parel, Antop Hill, Pratiksha Nagar in Sion, and Suman Nagar in Chembur are hoping that this newly operational public transport may prove a boon for them during monsoon. Chembur’s Ajit Mandavkar (26) who is frequently using monorail to reach his office located in Parel said, “I decided not to use the car this monsoon.

I am completely relying on the monorail services this time. Although the frequency of trains are quite less due to the reasons best known to the authorities, I believe travelling in monorail can save my life than walking in waterlogged areas or getting stuck in my vehicle.” Another resident and activist of Chembur, Rajkumar Sharma also believes that monorail can help commuters at the time of heavy rainfall. “Since the monorail passes through the waterlogging areas, people can switch to public transport instead of travelling in their private vehicles,” remarked Sharma.

The Mumbai Metropolitan Region Development Authority (MMRDA) is currently handling the services of monorail after taking it over from the SCOMI Engineering in December last year. MMRDA officials said, “During monsoons, proper announcements will be made at every stations to keep commuters informed about the areas which are flooded and from which nearest station can commuters alight to reach their destinations. Since Phase II of monorail has barely completed three months of operation, the route is still new to many commuters, hence there will be sufficient staff deployed to help commuters, who are stranded due to the floods.” Despite the fact that the rakes are not enough to increase the current frequency of trains, MMRDA has ensured to provide uninterrupted services. The existing rakes will be monitored regularly to avoid any inconvenience at the time of heavy rainfall.